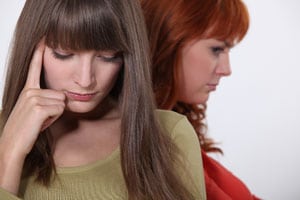 She was one of your best friends. The betrayal is a double whammy. How could he? How could she?

Yes, this happened to me. She was married too; my husband and I had dinner regularly with them as a couple. She and I had only known each other a few years, but we felt an immediate, strong connection and became fast friends.  I hosted her 50th birthday party at my house.

My husband had admitted to me that he had a crush on her, but I blew that off, saying I had a girl crush on her too. She could be pretty charismatic. She and I could talk our heads off together.

But then one afternoon, he came to me sheepishly and said he’d slept with her –  hey were in love. I was floored, to put it mildly. Always one to take my share of the blame, I couldn’t totally hate him. I’d loved him for more than 30 years and still loved him. I knew there were some problems in our marriage, though I never thought he’d be driven to something like this. I was ready to forgive him, go to counseling, make some changes. He wasn’t interested. He was only interested in spending his life with this “soul mate,” as he so heartbreakingly called her.

I won’t pretend I wasn’t angry at him. I went through all the stages of grief, though mostly I was just sad. But eventually I got to the point where I could move on. I can talk to him now, four years after our divorce, without much emotion. Still, thinking of all our history together makes me sad. As the holidays approach, I have to accept, once again, that our little family is no more. His stocking won’t hang over the fireplace with my daughter’s and mine. He won’t fill ours with all the trinkets he used to get a kick out of buying us.

And where am I with the other woman? He lives with her now. I have not laid eyes on her since he spewed the horrific news. I can’t stand the thought of looking at her or hearing her chirpy, How are you? She sent me one email, sort of an apology, but really just a list of rationalizations why they had to be together. It only made me madder. I didn’t respond.

Can I forgive her? She was my friend, but I didn’t love her like I loved my husband. It was easy to fall into hate and anger toward her. Yet, I know those negative emotions only hurt me. Forgiving her is for myself. It gives me peace. It doesn’t mean I condone what she did. We’re all human and make mistakes, sometimes huge mistakes. Yes, I can forgive, but I still do not ever want to speak to her again. I do not want to see pictures on Facebook of them cutting a Thanksgiving turkey together.

Writing was my outlet that helped me heal. The trauma of my separation and divorce at least ended up in positive changes in my life, and resulted in my book of poetry Untying the Knot. People have told me my book has helped them, and they’ve given it to friends going through divorce. Touching others like that has been a gift to me.

Here’s one of the poems about the other woman. It was inspired by this quote: “You don’t have to hate the Komodo dragon, but you don’t have to get into its cage either.” – David R. Hawkins, MD.

Note: “Qi Gong,” referred to in the poem, is a form of meditative body movement, similar to Tai Chi.

O friend who is now Komodo to me
I don’t blame you for loving the man
I loved – he’s Rhett Butler handsome
with that sly smile when he laughs
at his own jokes. He can be kind, sexy.
He’ll be easy to live with if your passion
matches his, but beware the electric
current of his criticism. It can burn.

O friend, we once had girl-crushes
on each other – debated the merits
of high heels, did Qi Gong, shared
gluten-free recipes, grumbled a bit
about our men. Last time I saw you,
I didn’t know you’d slept with mine.

Was it hard to act normal? You said
the pain between my shoulder blades
might be stress over work. My psyche
must have known: Next day, I found out
you’d knifed me. What in you allowed
your betrayal? You live with it now
and with a man heavy under his guilt.

Remember the teachings we studied,
you and he and I? We all do the best
we’re capable of at the time. I believe
you only did what you could… just
as I cannot tell you in person I forgive
you, though I do, as much as I’m able
in this moment…

While Master Chen guides me
to Push Up the Heavens…
lift my palms from heart to sky,
exhale, lower, repeat.

Karen Paul Holmes is the author of two books of poetry, No Such Thing As Distance (Terrapin Books, 2018) and Untying the Knot (Aldrich Press, 2014). She was chosen for Best Emerging Poets by Stay Thirsty Media in 2016, and publications include Prairie Schooner, Poetry East, Atlanta Review, diode, and Poet Lore. To support fellow writers, Karen started and hosts a critique group in Atlanta and Writers’ Night Out in the Blue Ridge Mountains. She is also a roving writing workshop teacher.