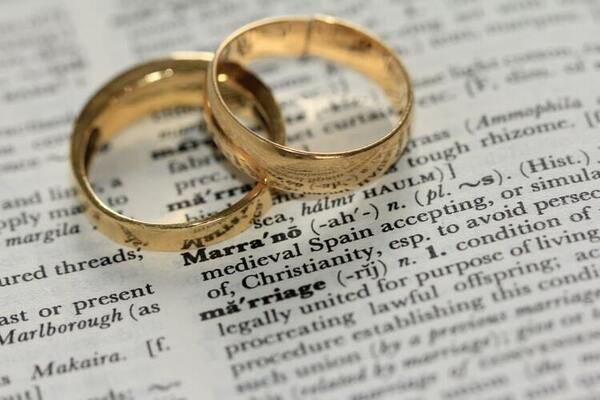 No matter the divorce, it seems to echo the same regret about half-way through: “Wow, I wish I had known that before I got married. Why does no one tell you that?” It’s time someone debunks some of the most frequent marriage law myths. Please note that these myths pertain to California law. Laws may differ in your jurisdiction.

MYTH #1: I’ve lived with my fiancé for 10 years, I have rights under common-law marriage.

Like most states, common-law marriage does not exist, although California may recognize a common-law marriage formed in one of the few states where it is still allowed. Accordingly, you need to be married to receive benefits, such as spousal support and marital property. If you didn’t tie the knot, all hope is not lost. You may be able to bring an action sometimes referred to as “palimony” or Marvin action. These types of cases are based on contract law, not family law, and do not exist in every jurisdiction. So, if you want to be protected by marital property laws and spousal support provisions, get married.

MYTH #2: My husband hasn’t worked our entire marriage. Good thing I don’t have to pay him spousal support as the breadwinning, successful (and beautiful) wife!

Sorry to be the bearer of bad news, but the law – at least in this regard – doesn’t frame the issue in terms of gender. If you are the spouse with greater income, you may have to pay your husband spousal support.

How much? Each case is different, but the court will consider things like: your ability to pay, his needs, both of your ages, his earning capacity, education and training, and the marital standard of living. In some states, marital misconduct may also be considered.

How long? It depends. Laws vary significantly by state. In California, a good rule of thumb is about half the length of the marriage until you reach about 10 years and then it could be much longer. So while it may seem enticing to marry a good looking, man with no financial stability, ask yourself before you get married: how long am I willing to support him financially after it’s over if his potential doesn’t materialize and he cannot (or will not) hold down a job?

MYTH #3: I didn’t put my spouse’s name on my bank accounts during our marriage, so there isn’t any marital property in there to divide.

Not necessarily true. In most states, it is the time of acquisition that is controlling. Assets acquired during marriage, with some exceptions, are marital property to be divide by the court. In some states, even property owned before marriage can be considered marital property, and is subject to division. Although laws vary by jurisdiction, simply keeping money in an account in your name may not mean it’s yours after the divorce.

Not true. In virtually every state, the Court looks only at the best interest of the children. In fact, in California, three different statutes of the Family Code provide that “the court shall not consider the sex, gender identity, gender expression, or sexual orientation of a parent” in determining the best interests of the child. Instead, courts are charged with ensuring the health, safety and welfare of the children and ensuring the children have frequent and continuing contact with both parents. It will look to factors such as: the ethical, emotional, and intellectual guidance a parent gives to their children (the “essence of parenting”), maintaining stability and continuity, and any history of domestic violence, drug abuse, or substance abuse. In some jurisdictions, there is a presumption – sometimes legal and sometimes cultural – of an equal timeshare.

MYTH #5: My wife cheated on me. I have to tell the Court all the details so that it will make favorable rulings for me.

Unless there is more than “she cheated,” the Court will not want to hear about it. All 50 states and the District of Columbia have some form of no-fault divorce. You should check with your local lawyer as to exactly what that means for your divorce. In most states, absent unusual circumstances, even if your spouse cheats on you, it will have no impact on your family law matter. The court will not even want to know the reason for the divorce.

Regarding custody, in general, one spouse’s infidelity is not relevant to the ultimate custody determination. Unless your spouse has introduced your child to a series of boyfriends/girlfriends, engaged in sexual behavior in front of the child, or left a young child home alone to participate in her affair, courts typically do not factor in infidelity in their custody determination.

With regard to the division of property, in most states, infidelity will usually not affect the division of property. However, even in a community property state, the one situation where cheating may impact the property division is if one spouse uses community property money to pay for dates, living expenses, and/or gifts for their paramour. In that case, the community is entitled to reimbursement from the cheating spouse. In some states, adultery is also considered when determining which party is awarded temporary possession of the family residence.

Concerning spousal support, the import of an extramarital affair really does vary by state. In many states (like California), infidelity has no effect on spousal support. Yes, you may have to pay spousal support to a spouse who cheated on you and is responsible for the end of the marriage. Not fair, but true. In other states, if one spouse can prove the other committed adultery, the offending spouse forfeits obtaining an award of spousal support. Always consult a family law lawyer who practices in your city and state to determine your jurisdiction laws (and how they are applied) before you proceed with a divorce.

Kristen Hirashima is certified as a Specialist in Family Law by The State Bar of California Board of Legal Specialization and the managing partner of Shebby Hirashima LLP. www.shebbyhirashima.com