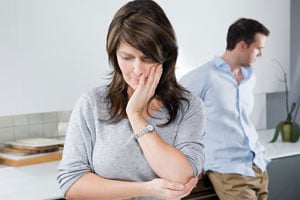 When reason is cast aside and you are securely fixed in an emotional response, there is a possibility you’ve experienced what is called an “amygdala hijack”.

Feeling Like a Fool in Your Marriage? It Could Just Be an Amygdala Hijack

“I’m a fool! I’m a friggin’ fool!” Eve’s eyes welled with tears. “Talking to you about it now makes it clearer and clearer to me… I’m a fool not to have seen it before! Adam doesn’t love me anymore! He’s slept on the couch for over a year… he doesn’t come home from work in time for dinner with me and the kids… we haven’t been to a movie together in… in… I can’t remember when….” Eve was crying now. “We don’t do anything together! Why didn’t I see this before?! I’ve wasted the last 10 years of my life!” Eve was sobbing now.

AMYGDALA  HIJACK. No point in talking while Eve was sobbing. Her brain was in what neuroscientists call “amygdala hijack” (a term coined by Daniel Goleman in his 1996 Emotional Intelligence book). What that means is emotion rules, reason is “offline.”

Specifically, our twin amygdala lodge in the center of our limbic midbrain are the Grand Central Station of our emotional memories. The amygdala form and store memories of emotional events, a) ruling our reactions to such events without logic or reason and b) causing our bodies to respond defensively with a Fight, Flight, or Freeze reaction. Our “newest” brain, the neocortex, is our “thinking brain”, but it receives crucial information milliseconds after the amygdala. Hence, when someone like Eve gets emotionally triggered, it’s her reptilian limbic mid-brain’s amygdala that’s alerted to incoming danger and readies Eve to fight, flee, or freeze.

In Eve’s case, her sobbing expressed her despair about her marriage: sobbing was her defensive response, like fleeing. She left her reason and logic behind to dwell in her growing recognition and alarm that neither she nor her husband Adam were happy or satisfied in their marriage. I showed her how to deep breathe, so she’d have a tool to calm and to soothe herself whenever she became upset. In was our third therapy session, and she was marshaling an avalanche of facts, collected rapid fire into her amygdala’s memory, and she became “snowed under” by her sudden conclusion. “Do we need to divorce?” she sputtered when she’d calmed down. (It takes most adults 15-20 minutes for our bodies physiologically to calm down after an amygdala hijack.) “I don’t know. Not necessarily one way or the other.” I said. “Let’s explore what’s happening, and not happening, in your relationship before deciding on next steps (eg., going into marriage counseling together).

FEELINGS ARE FINE, BUT ARE NOT FACTS. I assured Eve that she was entitled to her feelings, all of them. But feelings aren’t facts. Feelings are her amygdala talking, not her frontal lobe neocortex with its reason and logic.  When she was calm enough, we later did two things together.

CHALLENGE THE CRITICAL VOICE. First, I asked her from where came that critical voice in her head. “Oh my Dad!” Eve said immediately. “If I did the smallest thing wrong, he’d yell, ‘You’re an idiot. How can you be so foolish to undercook the hamburgers… or… pile the snow of that side of the driveway… or whatever.'”

“And your Mom’s reaction?”

“She says, ‘Now Frank, Eve is just learning…’ But he’d turn on her too. ‘Oh, shut up! I don’t suffer fools like you both!'” If Eve kept being critical of herself, like her Father, she was going to have a harder time thinking clearly and making well-informed decisions, along with feeling good about herself and her choices. So challenging that continuous critical voice inside her head was an ongoing part of our work.

NEOCORTEX BACK ONLINE.  As Eve soothed herself more and more and better and better, over time, we together unbraided many aspects of her feelings about herself and her relationship. After several months of individual therapy, she was able to have a series of discussions with Adam about how unhappy she experienced herself and him. They had numerous conversations in which both triggered the other into amygdala hijacks. But eventually they could stop shouting and talk: they agreed to seek out an experienced marriage counselor who would help them decide jointly what kind of relationship they each hoped for, whether or not they stayed together.

So, actually, no one would be an April Fool this April. Just two lonely people trying to reconnect (maybe?!) and find a way forward into a more satisfying and happy life.

Names and situation are not real, but a composite of several patients. Stay tuned for May’s blog, “April showers bring May flowers,” about the process of how couples can best discuss difficult relationship topics.