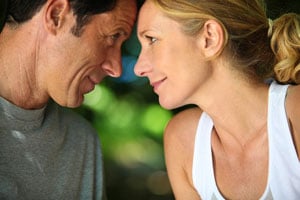 August is a kick-back month for many. Fewer folks in the office. Many on vacation. I hope you’ve taken a little time off from daily routines – maybe a few long weekends when you can kick up your feet and look at…well…along with a colorful garden, some beautiful view, or even the cute little chipmunk who just scurried across my patio to nibble on one of my flowers…to look at your partner. A mutual gaze between you and your partner can go a long way.

Researchers since the 1970s (e.g., D.Stern, B.Beebe) showed us how babies’ intense gaze at their mothers – or fathers – was a crucial psychological process of finding out who they were, and how to be in a relationship with another. Present-day psychologists are using the same mutual gaze to help couples to know and to relate better to one another.

Try this kick-back kinda exercise that’s good for your health, physical and emotional. You can learn to read and to know your partner well. You can use this exercise to fight well. To soothe. To repair.

Gaze quietly into your partner’s eyes (not meant to be a sexual activity). You can lie in bed or sit in facing chairs, knee to knee. No need to talk or to touch: OK to laugh, cry, giggle, or have whatever emotion arises. Try not to control your face. You can avoid feeling self-conscious by pouring your attention over to your partner’s face: notice every detail – changes in his/her eyes, face, skin color, skin tautness, breathing, muscle tension. Your focus is on the Other, not on your own internal shifts or feelings. Look and be seen, just as you are. Know and be known, just as you are.

No need to set a timer, but try to do at least three minutes. Afterwards, notice how you both feel. Closer? Or more distant? Uncomfortable at any point? Triggered by what? If discomfort resolved, how?

This exercise can be a constructive and fun tool to use in your relationship. Below I describe why a mutual gaze is so effective in oh so many let-me-count-the-ways.

Yeah. Here’s Lookin’ at You, Babe. Gazing Is Exciting.

Question: What common response do you have to an orgasm, a division math problem, and a photo of a dead body? (Fong, J., 2012). Answer: The pupils of your eyes automatically dilate slightly. What’s the big deal? you ask.  Well, scientists say that pupil dilation correlates consistently to emotional arousal resulting from cognitive, emotional, and sensory factors in our environment. Thus, this measure, called pupillometry, has been increasingly used to investigate how we respond to many diverse psychological phenomena.

The psychological phenomena between you and an important person in your life is what I’m exploring here. What happens to our pupils specifically, and our eyes in general, when we look at a loved one is an essential way to know that other person, and for him/her to know us.

Our Pupils. Our Autonomic Nervous System (ANS). When we look at someone we love with a mutual gaze, the visual cortex at the back of our brain (occipital lobe) captures the actual image. An older part of the brain, the autonomic nervous system (ANS), actually registers and responds to these incoming signals. Our ANS regulates without our awareness or permission the continuous tuning of our pupil size, along with other involuntary functions, including our internal organs such as our heart rate, heart rate variation, and blood pressure.

Our pupil size reflects both branches of the ANS. It’s dilated by the Sympathetic branch (SNS), the accelerator. It controls excitation and gives us vitality, e.g., when it’s triggered by the “fight or flight” reaction when we are excited and/or stressed. It’s constricted by the Parasympathetic branch (PNS), the brakes, which controls relaxation and gives us tranquility. In a healthy, secure relationship, we can experience a self-regulatory and arousal state of balance. This occurs when both these branches of our ANS are in a synchronized balancing of movement and stillness, self-activation, and self-control. When you do the exercise I describe here, you both will likely be in a balanced state of what Tatkin calls “quiet alertness”.

Our Pupils. Consciousness and Our Unconscious. Scientists say they can study consciousness by observing pupil size changes. I’d add that this is the study of unconsciousness, too! For example, in the 60s and 70s, one study (Hess et al ,1975) changed the pupil size in women’s pictures that male subjects viewed. Not consciously “knowing” why, the men were more attracted to the women with large pupils, calling them  “soft”, ”more feminine” and “pretty”: they described the women with small pupils as “cold”, “hard”, and “selfish”.

So why would this preference for women with large pupils exist? (Murphy, C, 2011). Note another study showing that women’s pupils dilate the widest while looking at a prospective partner or loved one during times of ovulation. So, unconsciously, out of our awareness, our autonomic nervous system may be genetically wired for men’s attraction,  and women’s excitatory response, to ensure biological success in passing on genes. So, “Here’s lookin’ at you, babe” seems to be the first step in a chain of successful reproductive behaviors designed to perpetuate our species!

This story is far more complex, as you may have guessed. In our social interactions with other, we need to make quick assessments whether we are in a safe or dangerous situation, or with a safe or dangerous person. Like the giraffe who automatically assessed that moving bushes nearby meant a lion was lurking, he fled and lived to procreate and to pass on his genes. It turns out that when your pupils dilate with interest, arousal, or excitement, oxytocin is released. This is the “feel good” neuropeptide that plays a central role in enhancing emotion recognition, interpersonal communication, and social approach behavior.

A slew of studies used double blind methods in which they randomly gave either the placebo or oxytocin (administered through the nose) to participants. Results significantly showed that compared to the placebo groups, the oxytocin groups a) gazed longer and more frequently toward angry vs. happy faces (Guastella, JA, Carson, DS  et al, 2008); b) showed increased number of fixations and total gaze time toward the eyes (Guastella, JA, Mitchell PB, Dadds, MR, 2008); c) showed increased ability to read emotion more accurately in the eyes in the RMET – Reading the Mind in the Eyes Test (Domes, G. et al 2007).

In another Gomes et al study, oxytocin reduced responses in the right amygdala, thereby reducing uncertainty and facilitating greater approach behavior in the subjects (Domes, G. et al, 2007). The amygdala is a central part of our limbic system, or emotion center, which automatically controls our autonomic nervous system. This is the part of the giraffe’s brain that was triggered, causing him to flee from the lion. It’s relevant to our story here, because when we gaze into our partner’s eyes, we want to feel comfortable and safe: we do not want to automatically react as if there is danger and that we need to look away…or flee!

Thus we’ve come full circle to understand that gazing at one’s partner is an excitatory event. Our pupils dilate automatically, out of our awareness. The feel good neuropeptide oxytocin is a chemical communicator, or transmitter that is also released. You can see that a mutual gaze into the eyes of your partner can be used in a positive and constructive way. The kids can be clamoring at the breakfast table, and a minute gaze across the table at one another can carve out a quiet connecting moment. You might be in the middle of a fight, and if one of you can remember to slow down, touch the other’s arm and say, “Hey! Lookin at you, babe!” and stay quiet for a moment,  you could change the emotional interaction. Or, on any day and at any hour, you can just kick back and stop time and just be with one another with a few minutes of gaze. Enjoy. Here’s lookin’ at you, kid.

In the interest of space, and the general public audience nature of this blog, I have not included references of the studies I‘ve read by D. Stern, B.Beebe, H.Fisher and her group, J.A. Guastella and his group, G. Domes and his group, and commentaries by J. Fong, J. Goldman, D. Kwon, C.Murphy, and S.Tatkin. If interested in the specific references, email me at [email protected] As always, I invite your comments to this blog.