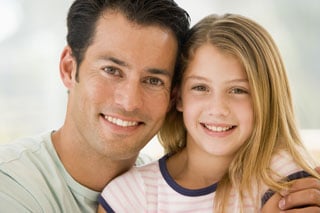 Many dads write to me asking for tips on raising a daughter with high self-esteem after their divorce. I always inform them that the father-daughter connection and relationship is very important.

Fostering a daughter’s self-esteem following divorce is a top priority, as girls are very vulnerable to cultural influences. For example, there’s evidence that daughters who feel connected to their fathers experience more satisfaction with their bodies and ultimately higher feelings of self-worth.

For the most part, a good relationship with an intimate partner is strongly tied to a woman’s relationship with her dad. The presence of a father (or lack of presence) in a daughter’s life will affect how she will relate to all men who come after him and can impact her view of herself and psychological well-being.

My research for Daughters of Divorce spanned over five years and comprised over 300 interviews with young women who reflected upon their parents’ divorce. The most common themes that emerged from these interviews were trust issues and a wound in the father-daughter relationship. My previous study published in the Journal of Divorce and Remarriage concluded that lack of access to both parents and an inability to deal with conflict in a constructive manner were associated with low self-esteem in young women raised in divorced homes.

Further, a large scale study cited in a Huffington Post article, “Teen Depression in Girls Linked to Absent Fathers in Early Childhood”, sheds new light on the importance of the father-daughter bond. Findings from the Children of the 90’s study at the University of Bristol showed that girls whose fathers were absent during the first five years of life were more likely to develop depressive symptoms in adolescence than girls whose fathers left when they were aged five to 10 years. These girls also demonstrated more depressive symptoms when compared to adolescent boys whose fathers left in both age groups. More research is needed on this key topic to explore reasons for these outcomes.

Why is the father-daughter relationship so vulnerable to disruption after a parents’ divorce? In a divorced family, there are many ways a father-daughter bond may suffer. Based on her research, Dr. Linda Nielsen found that only 10-15% of fathers get to enjoy the benefits of shared parenting after divorce. Neilson posits that while most daughters are well adjusted several years after their parents’ divorce, many have damaged relationships with their fathers. Unfortunately, if the wound is severe, a girl can grow into adulthood with low self-esteem and trust issues.

What a girl needs is a loving, predictable father figure – whether married to her mother, single, or divorced. Joshua Coleman, Ph.D., a recognized expert on parenting, explains that one of the predictors of a father’s relationship with his children after divorce is the mother’s facilitation or obstruction of the relationship.

In his book When Parents Hurt, Dr. Coleman writes, “Mothers who feel wronged in the marriage or divorce, who believe that mothers are more important than fathers, or who have psychological problems may directly or indirectly interfere with the father’s desire to have an ongoing relationship with his children.” Moms can do a lot to support their daughter’s close relationship with their dads by avoiding bad-mouthing them and encouraging regular, ongoing communication and in-person contact.

1. Encourage her to be assertive.

This includes voicing her opinion even when it’s not popular to do so – and be sure to listen and validate her feelings.

2. Direct your praise away from her body and appearance.

Instead, comment on her talents and strengths, saying things such as “You are making such healthy choices” or “Good for you for going for a walk” with encouragement for her to be active and healthy.

This promotes loyalty conflicts and may make it more difficult for her to heal from the losses associated with divorce. Don’t let your cynicism or anger get in the way of your daughter’s future. Don’t pass on your negative views of relationships on to her.

4. Protect her from negative cultural influences.

This includes those that encourage her to be overly competitive with other girls or young women. Point out what she has to offer the world and help her shine.

5. Encourage her to develop interests and practice her talents.

Recognizing her efforts and strengths will boost your daughter’s confidence in the years to come.

6. Spend time with her doing things she enjoys.

Encourage her to find healthy outlets such as exercise, joining a club at her school, or participating in a community activity.

7. Encourage her to spend close to equal time with both parents.

Be flexible about “parenting time” – especially as she reaches adolescence and may need more time for friends, school, jobs, and extracurricular activities.

Since many daughters perceive limited contact with their fathers as a personal rejection, this can lead to lowered self-esteem and trouble trusting romantic partners during adolescence and adulthood. Psychologist Kevin Leman posits that fathers are the key to their daughter’s future. A child development expert, he writes, “That evidence shows that a father’s relationship with his daughter is one of the key determinants in a woman’s ability to enjoy a successful life and marriage.”

In Always Dad, author Paul Mandelstein advises divorced dads to find ways to play a crucial role in their daughter’s life. He suggests that divorced parents call a truce with their ex-spouse – to put an end to active fighting and to collaborate.

The father-daughter connection, even several years after a family dissolves, is heavily influenced by consistency in contact and the quality of the relationship. Think about how you want your daughter to remember the time you spend with her in the years to come. If you want those memories to be positive, try to carve out special activities to enjoy with her during her childhood and adolescence.

Follow Terry on movingpastdivorce.com and order her book Daughters of Divorce. In it you’ll find chapter three: “Longing for Dear Old Dad: Overcome Your Broken (or missing) Relationship with your Father”.