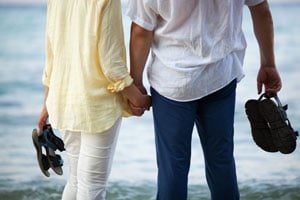 Over the last 50 years, there has been a quiet shift in the landscape of family life in America. Approximately 50% of adults over age 18 marry; this number is compared to 72% in 1960, according to The Pew Research Center. The medium age at first marriage has never been higher for brides (26.5 years) and grooms (28.7 years) according to this report.

Some think this decline is because the progression of individualism has made it more difficult for couples to achieve satisfying and stable relationships. Others believe that changes, such as increasing acceptance of singlehood and cohabitation, have made our lives richer because we have more opportunities for personal growth.

However, most experts agree that marriage is not discarded but rather deferred. In fact, Richard Settersten, Ph.D. and Barbara E. Ray, authors of Not Quite Adults, write: “Marriage is on hold for this generation, but it is delayed, not abandoned. The majority of young people eventually marry. They are just getting their ducks in a row before they do.”

That said, stereotypes abound about men avoiding commitment and websites such as eHarmony offer advice to women looking to change men who are commitment-phobic. Truth be told, the data from the National Longitudinal Study of Adolescent Health (Add Health) – a large nationally representative survey of 15,00 young men and women (average age 22) – demonstrates that 82% of men and 84% of women differ little in their desire for commitment, seeking it as their ultimate goal.

According to recent research done by Pew Research (Pew 2013), men and women are equally interested in getting married and say that marriage is an important value in their life (Pew, 2012). Both genders also believe that love is an important reason to get married (Pew, 2012) rather than simply finances, childrearing, or companionship.

Why do young adults delay marriage in the 21st century? It makes sense that people in their 20s and 30s might hedge their bets and see relationships as risky if they watched their parents’ marriage fail or even relatives’ and friends’ parents’ marriage collapse. Multiple factors have merged together to create a generation of ambiguity. However, one of the most compelling reasons is cultural since the first generation of children to grow up witnessing mass divorce are now making their own decisions about love and commitment.

Divorce expert Paul Amato posits that many adult children of divorce (ACODS) fear relationship failure. They fear that when they open themselves up to other people, they will get hurt, and will lose out on love. Fear of failure can hold ACODS back and prevent them from being their best selves. It limits them by causing anxiety and fostering a pessimistic attitude about the future.

Other reasons why people aren’t ready to take the plunge include uncertainty about whether they’ve found the right partner. Perhaps you bought in the myth of finding a soulmate and compare all of your dates to an ideal that doesn’t exist. Additionally, some people fear loss of freedom and worry that they’ll begin to see a commitment as a limitation rather than a choice. If this is the case, it’s a clear sign that you are not ready. A healthy relationship is built on love, respect, trust, and mutual admiration rather on obligation.

Many men fear commitment and don’t really envision themselves in a committed relationship. Here’s an example: Tyler just can’t see a relationship working out, but he loves his girlfriend Ashley. Tyler is a successful, educated young man, but relationships have not been a priority for him as he’s been busy finishing up his degree in business management and looking for jobs. Although he says he doesn’t believe in marriage (he watched his parents’ part ways when he was 16), he wants someone who will be a true match for him and who enjoys similar interests.

“I think I can have a happy marriage, but I fluctuate,” he says. “If it’s the right woman, if we’re both compatible, I’ll be all in. But it’s going to take a lot to prove it to me because I want it to be foolproof.” Tyler’s craving for a failsafe relationship will always be unsatisfied because such relationships don’t exist.

By acting from a place of mistrust and apprehension, Tyler is most certainly creating his future, or what he calls, a “self-fulfilling prophecy.” There are no guarantees in any relationship. Some work out and some don’t, but approaching relationships with fear or doubt almost guarantees a negative outcome. A lot of Tyler’s fears began after his mom moved out with a friend of his dads when he was a sophomore in high school. Since then, he can’t seem to shake the feeling that all relationships are doomed.

6 Ways to Get Ready for Commitment:

This includes taking a look at the impact of parental divorce, your own breakups or divorce, and infidelity (parents and others) have had on your emotions and mistrust of relationships.

2. Face your fear of commitment

Embrace the notion that a lifetime commitment has to be made when there is some degree of uncertainty. If you wait to make a commitment when you are free of doubts, it will never happen.

Make a commitment to a partner who seems to be a good match for you.

4. Take your time dating someone

Make sure you’ve known them for at least two years to reduce your chance of divorce.

5. Explore your values and interests

Look for common values with individuals who you date. If you marry someone with drastically different values, you will face complex issues that could put you more at risk for divorce.

6. Trust your judgment and be consistent with your commitment

Commitment to someone you love and consider your best friend is not an on-again, off-again proposition.

Know that no relationship is conflict free, but you are worthy of having a relationship that makes you happy. Maybe you simply haven’t met the right person yet or you’re simply comfortable with the way things are. If you aren’t there yet, embrace where you are now. What is it that holds you back from achieving a satisfying relationship? And once you have it, what will you do when you get there?

Relationships, whether they last three months or three decades, can provide their participants with the love, understanding, and intimacy they need at the time. So why not take a chance on someone who has demonstrated consistency between their words and deeds. But if you’re comfortable staying uncommitted, embrace your single lifestyle rather than plunging into a commitment when you’re not ready.

Follow Terry Gaspard on Facebook, Twitter, and movingpastdivorce.com. She is pleased to announce the publication of her new book Daughters of Divorce: Overcome the Legacy of Their Parents’ Breakup and Enjoy a Happy, Long-Lasting Relationship.