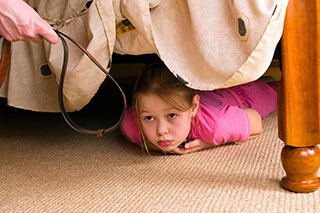 Divorce is a time for making adjustments. Divorcing parents often struggle emotionally with the difficulty of having less time with their children because the children are now residing out of their primary care and/or splitting their time between both parents. This adjustment is particularly cumbersome when one parent believes that the other parent is abusive or neglectful of the children. This leaves many wondering, how do you deal with suspicions of child abuse from your ex-spouse?

Deciding the right course of action is critical. The stakes are high, and making the wrong choice could place your child at risk of serious physical or emotional harm. Here, we discuss the definition of child abuse in New Jersey, which will help you decide if your child may be at risk. We then provide some action steps to identify when your child may be the victim of maltreatment at the hands of their parent.

DEFINITION OF CHILD ABUSE OR NEGLECT

Most parents have an idea of what constitutes child abuse and neglect. Burning a child, leaving a young child home for a weekend alone, failing to feed or diaper a baby, and committing sexual abuse on a child victim are pretty obvious examples. However, the New Jersey statute N.J.S.A. 9:6-8.21(c) includes six broad categories of conduct far in excess of what we normally consider child abuse. The most frequently cited statutory provision relied upon the Child Protective Services is N.J.S.A. 9:6-8.21(c)(4)(b), which defines an abused or neglected child as one who is harmed or placed at imminent risk of harm as his parent or guardian fails to exercise the “minimum degree of care” in providing for the child’s needs.

That very broad language was enacted to cover all forms of child abuse, which could have been prevented had the parent or guardian performed some act or failed to engage in some conduct. To flesh out what this language means, we turn first to the New Jersey Administrative Code, which has a long list of alleged abuse or neglect categories. But, to abbreviate the discussion, one would only know that the categories of potential maltreatment include actual harm (burns, cuts, fractures, etc.), as well as potential harm (risk of mental or emotional impairment; risk of harm due to substance abuse; environment injurious to health or welfare).

Oftentimes, divorcing parents see changes in their children that they attribute to the stress of the change in familial structure. Because the emotional toll of divorce may be substantial for children, parents should be mindful not to assume the child is being harmed by the other parent simply because the child has difficulty separating from one parent at times when he is to go to the other parent, or because the child reports feelings of distress at sleeping over at the other parent’s home. These behaviors may be normal. However, a seasoned mental health professional may be required in order to determine whether a child’s change in mood, attitude or behavior is concerning for child maltreatment.

Dealing with Suspicions of Child Abuse by the Other Parent

Here is a list of a few commonly addressed concerns for child abuse or neglect and what New Jersey Courts have to say about them:

2. Domestic Violence – Exposure to domestic violence is not per se child maltreatment. The child must have witnessed an act of domestic violence, and there must be causal relationships demonstrated between witnessing the incident and emotional harm to the child. Division of Youth & Family Services v. S.S., 372 N.J.Super. 13 (App.Div.2004).

3. Substance abuse/alcoholism – A parent should not exercise visitation, even supervised visitation, while impaired (this includes drugs and alcohol); however, Title 9 is not intended to extend to all parents who imbibe illegal substances at any time. Division of Youth & Family Services v. V.T., 423 N.J. Super. 320 (App Div 2011).

4. Living conditions – Substandard, dirty and inadequate sleeping conditions are unfortunate incidents of poverty; they do not establish child neglect or abuse. Failure to educate and provide intellectual stimulation was not the intended definition of educational neglect; parent contribution to truancy or interference with normal education is required. Doe v. G. D., 146 N.J.Super. 419 (App.Div.1976).

5. Sexual abuse/molestation – In order for a court to make a finding that a child has been sexually abused, either the child must testify, or his disclosure of abuse must be corroborated – i.e., there must be some direct or indirect evidence to support the child’s statement. Age-inappropriate, precocious sexual knowledge may qualify as corroboration. Division of Youth & Family Services v. Z.P.R., 351 N.J.Super. 427 (App.Div.2002).