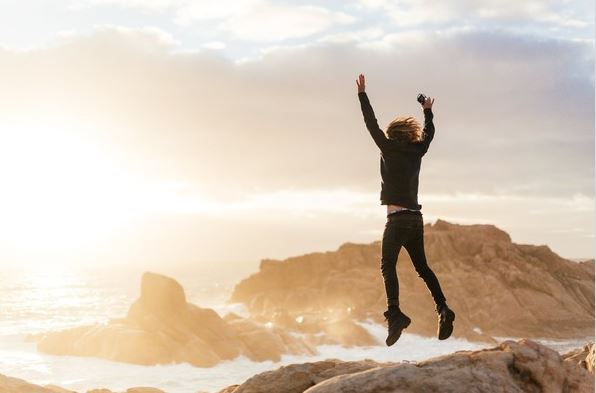 It’s hard to imagine living your best life after divorce. Since my divorce, I find myself dreaming about what my new life will look like. It’s there on the screen of my mind. In my imagination and through my senses, I can see myself already living it. I want to start my own coaching business, write a book, create online courses, and attract a healthy romantic relationship.

Eventually, I’m ready to go for it. The time is NOW.  As I take the leap and go for one goal, suddenly I can’t move forward. It’s as though an invisible hand is holding me back. I feel stuck. I feel an inner struggle.

As I strive to go after what I want, an overwhelming feeling of dread and extreme discomfort sets in. Consequently, all I want to do is get rid of that feeling. It’s a familiar feeling.

The feeling is so unpleasant and unnerving that it paralyzes me. It stops me in my tracks. Subsequently, I stay where I am. The place is familiar and safe except I am going nowhere, and doing nothing about it.

In addition, I make excuses in my mind to convince myself that it’s all right to stay where I am now. Then, I rationalize that although I’m in a different place after divorce, it’s not so bad. In the back of my mind, I am thinking, “Settling is not success and rebuilding a new life full of hope and promise for my future.”

It’s time to understand these feelings so that I can start to live my best life after divorce.

What is the uncomfortable feeling that paralyzes me from moving forward? It’s called a limiting belief, which is also known as a paradigm. A limiting belief is a habit, pattern, or assumption that is deeply embedded in the subconscious mind. When I think of doing something different and out of my comfort zone, the limiting belief holds me back. I admit fear of the unknown can be overwhelming.

After doing some research, I learned how to push past the fear. What I have to do is replace the “fear thought” with a new, positive, and forward-moving thought. I can replace that thought through repetition. Otherwise, the limiting belief will keep me “stuck” right where I am.

How is a Limited Belief Formed?

Up until the age of seven (some researchers say even earlier) the conscious mind is not fully developed yet. At that early age, we have limited experiences and perceptions. Therefore, we are not sophisticated enough to take the data we have and make informed, conscious decisions.

So, during those early years, our mind is like a sponge. It is wide open taking everything in which goes right into our subconscious mind. Our environment, experiences, and genetics give us our belief system; and for this reason, our habits and behaviors give us the results we are getting in our lives.

Why We Need to Know How Limited Beliefs Work

Limiting beliefs are mental blocks preventing us from achieving our goals and living our best life after divorce. Because they are in the subconscious mind, oftentimes, we don’t even know they exist until we ask the hard questions to discover them.

Here is an example: Rhonda is over 40 and recently divorced. She works her way up to a top position in the company she presently works for. Secretly, she wants to start her own company. Rhonda is smart, fair, and a true leader.

Deep down, Rhonda feels that she could really be a huge success on her own. She can picture herself building her own company. Somehow, though, she just can’t make herself “take the plunge.”

What is Her Belief?

Rhonda writes down all the positive reasons she can think of as to why she should start her own company. Next, she writes down all the negative feelings and thoughts that come to mind when she thinks of going for this life-changing goal. The negative associations, particularly the strongest one, will reveal what her limiting belief is. It is what’s holding her back.

Once she knows her limiting belief, she can begin to do the work to change it so that she can move forward. Obviously, fear of failure and failure itself are not new to her. Her thoughts and feelings about fear of failure got into her mind through repetition.

Fear of failure is only a problem when we experience it over and over again.  It becomes part of our belief system.

There are several ways to change paradigms. The most commonly used one is to change the negative thought pattern replacing it with a new, positive one. Through repetition, the neural pathways to the subconscious mind will eventually push out the old limiting and replace it with a new positive, forward-moving one.

How Does She Do it?

She changes her mindset so that she sees from a new perspective. Also, she replaces the old negative thoughts that create the anxiety and replaces them with thoughts of confidence and success. Rhonda repeats positive statements to herself over and over that describe how she wants to be and feel.

Every time the self-talk of fear, worry, and unease come in, she changes the thoughts right away. She can change her thoughts in an instant. The trick is to be aware of when they come in – along with what situations, people, ideas, etc. that will trigger them.

The old fear of failure is firmly established. As she repeats the positive self-talk over and over, eventually, through repetition, the new thoughts pass on to the subconscious mind. Meanwhile, they become a part of her belief system. Rhonda begins to believe in them.

What Triggers the Limiting Belief?

Rhonda discovers when the old limiting belief comes up by becoming aware of how she feels inside. If she starts to feel anxious or fearful, it’s the internal signal (trigger) that she needs to push the old belief aside. Then, she repeats the new one over and over again.

Eventually, Rhonda accepts the new one as her truth. It becomes part of her belief system. Belief is more than half the battle.

We can achieve any goal we desire. Once we discover what holds us back, confidence and a driving force that comes from within replaces anxiety, fear, and uncomfortable feelings.

As a result, we will have access to a belief system that will enable us to go over, under, or through any obstacle that gets in the way because we believe we can.

We can create our new,  best life after divorce filled with hope and promise. All it takes is desire, discipline, and changing the way we think.