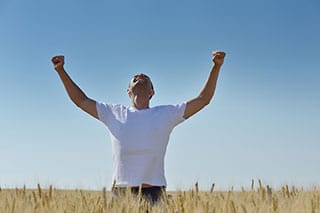 Getting through divorce is hard. When a couple makes the paramount decision to say, “I do,” and commit to a future through marriage, few of them could anticipate that their union would one day end in dissolution. Despite the best laid plans, the American Psychological Association estimates that nearly 50 percent of married couples will divorce, with subsequent marriages dissolving at an even higher rate.

A variety of issues lead individuals to separate – from arguing to unrealistic expectations and everything in between. For most couples, however, one commonality exists in spite of the wide array of reasons that led them to this pinnacle: they have made the choice to live separately and end their marriage.  (We of course recognize that in cases of abuse and other extenuating circumstances, divorce is no longer a choice but a necessary end to an unhealthy relationship).

While the next step may seem like common sense, it is the most important choice two people can make as they enter the process  of divorce – even more important than who gets the house or how to plan summer vacations.

Tips on Getting Through Divorce

Do you want to have a good divorce or a bad divorce? Yes – this choice is up to each individual. Separating a family, whether it consists of adults or adults and their children, is a journey that can take individuals on a high road of dignity and respect or walking a fine line of pain and suffering that can last a lifetime.

Most of us, if given a clear choice, would opt for the higher path. Unfortunately, the flood of emotions that drives the divorce process can muddy the waters and cloud one’s judgment. People spend years planning their weddings and now they need to learn to plan their divorce. Mediation, coaching, and counseling can help individuals have honest, cooperative, and constructive conversations that set the stage for their long-term individual and relational health.

Amid the divorce horror stories that plaster grocery store tabloids and plague online news feeds with gritty details, a few glimmers of hope shine through: tales of healthy divorce where individuals make the careful choice to end their marriage gracefully and not spend years battling in court and ruining their lives.

The Bill and Melinda Gates Divorce

Bill and Melinda Gates set the bar with a high-profile divorce now unfolding in the public eye that shows the world a couple can still work together as business partners, separate from their decision about their adult relationship. They have become a role model for individuals and families making the careful decision to transition their families into a better and more peaceful place.

The Gates have publicly attributed a variety of reasons to their decision, which is often the case rather than one singular event that motivates divorcing couples. Though their global status as one of the world’s richest couples leads some to speculate on the cause and timing, the Gates released a statement earlier this month that simply reads:

“After a great deal of thought and a lot of work on our relationship, we have made the decision to end our marriage. Over the last 27 years, we have raised three incredible children and built a foundation that works all over the world to enable all people to lead healthy, productive lives.”

This statement serves as a guiding light that will shine on their journey ahead – they acknowledge the successes of their marriage, both personally and professionally, but admit their mutual decision to end their marriage and this chapter of their lives.

So, what’s next for Bill and Melinda, whose combined fortune is estimated at a jaw-dropping $124 billion? Needless to say, there’s a lot at stake. It seems they will navigate those waters together starting with their leadership of the Bill and Melinda Gates Foundation, the world’s largest charitable organization valued at more than $50 billion. On May 3, Bill Gates transferred $1.8 billion in stock to Melinda Gates and their separation announcement included a commitment to, “continue our work together at the foundation.”

As social media and the 24-hour news cycle propel many celebrities to instant role model status, we are hopeful that the Bill and Melinda Gates divorce story will continue to be one that demonstrates that getting through divorce can be done with dignity and grace at any age, regardless of fame and fortune.