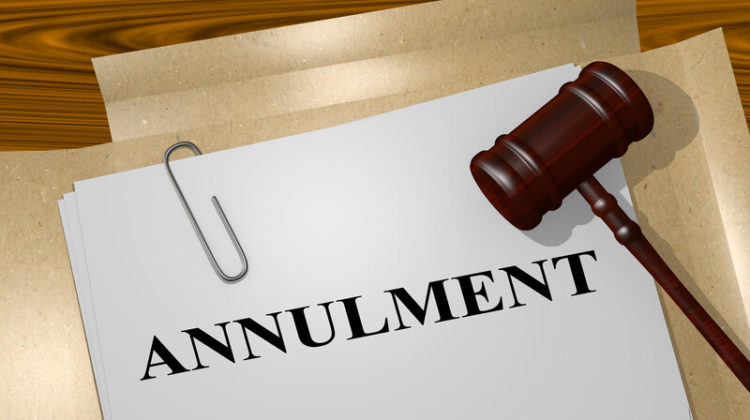 While we always hope that a marriage will be happy and fulfilling, unfortunately, they don’t always work out.

When things don’t work out, we work to ensure the process is as painless and expedient as possible.

There are two ways to end a marriage here in Florida, divorce or annulment:

In the simplest of terms, the difference between an annulment and divorce is that a divorce ends a marriage, while an annulment erases the existence of the marriage as if it never existed. Not all states recognize annulment as a legal way to terminate a marriage, so it is important to understand the ins and outs of annulment in Florida to determine if it is the best option for your family over moving forward with divorce proceedings. Annulments are granted on a limited basis, so you want to ensure you qualify completely before exploring this as an alternative to divorce.

To be eligible to petition for civil annulment in Florida, you must meet specific requirements to prove to the court that your marriage was never valid in the first place. Requirements typically include some type of fraud but also can include other circumstances. Grounds for annulment in the state of Florida include:

While infidelity is one of the most common grounds for dissolution of marriage, it is not considered grounds for annulment. The state of Florida does not have a specific procedure or statute for the annulling of a marriage. The marriage can be annulled as long as the marriage is considered void or voidable based on the grounds listed above.

A marriage is considered to be a void marriage if it is one that never should have been granted in the first place. A marriage is voidable if either party can challenge the legitimacy of the marriage, even though it was considered valid at the time of marriage. For example, if one of the parties finds out that their spouse was already married to someone else, the marriage would be considered voidable.

Annulment is much more difficult to obtain than divorce due to the burden of proof associated. Florida is a no-fault state, meaning you don’t have to prove adultery or other reasons to be granted a divorce.

What You Need to Know About Florida Marriage Annulment

In Florida, there is no limit to how long you can be married and still be eligible for annulment if your marriage is not working out. Typically, the person who is considered the innocent spouse has to file for annulment, as most states will not allow the wrongdoer to be the plaintiff in an annulment case.

In some ways, annulment is viewed as a more simplified process than divorce. After all, if the marriage never existed, there’s no property to divide. Obviously, property division will still need to happen, but it is not part of the annulment proceedings. While property division isn’t part of an annulment case, a judge does have the ability to grant alimony to a spouse.

After a Decree of Annulment is issued, both parties are eligible to marry. If they marry before the decree is issued, the resulting marriage will be considered invalid.

While it is rare for the state of Florida to grant an annulment, it does happen. Determining validity is the first step in moving forward with an annulment case. If an annulment is not granted, divorce is the best option for a couple looking to dissolve a marriage.

If you’re unsure whether to divorce or request an annulment, contact us for a consultation. We will help you determine the best course of action based on your specific circumstances and situation. Our divorce lawyers have extensive experience and are ready to help you move forward with the best plan for your unique conditions.