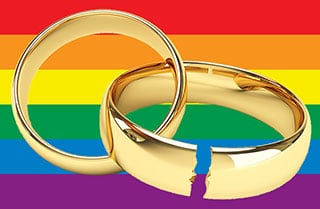 After being prevented from getting a divorce in Mississippi in 2013, a lesbian couple has finally been given the right to do so. This follows the U.S. Supreme Court’s ruling in the Obergefell v. Hodges case on June 26, which legalized same-sex marriage.

Lauren Czekala-Chatham and Dana Ann Melancon, who married in San Francisco in 2008 and moved to Mississippi, had appealed the court’s 2013 decision – an appeal that was opposed by Mississippi Attorney General Jim Hood.

However, since the U.S. Supreme Court’s ruling, Hood has requested the court to allow the separated couple a divorce. On Thursday, five of nine Mississippi Supreme Court justices acknowledged Hood’s stance.

King and Kitchens had originally requested the court to allow the couple a divorce in February. Their dissent stems from wanting the court to issue an opinion first, however they agreed with the final result. Dickinson and Coleman argued the state court should make its own decisions, especially considering Mississippi residents voted to include the ban on same-sex marriage in the state constitution in 2004.

According to The Associated Press, Coleman wrote: “No court should be elevated above the Constitution itself, and if the Supreme Court of the United States has done something it has no constitutional basis for doing…then those of us who sit below it must ask what, if anything, it means.”

Currently, there is a Supremacy Clause in the U.S. Constitution that enforces state courts to follow the U.S. Supreme Court’s rulings and its interpretations of the constitution. However, Dickinson stated there are legal scholars who have argued that states do not have to follow a decision made by the Supreme Court, and it does not have to be recognized as a “legitimate legal authority.”

The case has been sent back to DeSoto County Court, where 53-year-old Czekala-Chatham originally filed for divorce, for a final decision. “I’m happy this battle has been won. But the war on discrimination is still ongoing,” Czekala-Chatham said in a statement  released after the court’s ruling. “I continue to struggle with the negative consequences that being in the public’s eye has caused.” Melancon currently resides in Arkansas.