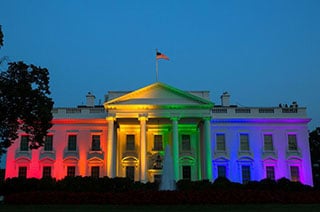 In spite of the rainy weather, the hundreds of thousands of spectators lining the streets of New York City to watch the annual Pride March were jubilant following the US Supreme Court’s decision to legalize same-sex marriage in every US state. On Friday, June 26, SCOTUS ruled five to four that the Constitution requires that  gay couples must be allowed to marry no matter which state they reside in.

The decision – which was supported by Justices Anthony M. Kennedy, Ruth Bader Ginsburg, Stephen G. Breyer, Elena Kagan, and Sonia Sotomayor – reflected the growing public support in the United State for gay marriage. According to the most recent Gallup poll, 63% of Americans now support same-sex marriage. This is up from 55% last year, 40% in 2001, and is the highest Gallup has found on the question since it was first asked in 1996. (Read more about the results of this poll here.)

Same-sex marriage advocates have worked hard to get states to drop their bans against gay marriage for years; until Friday’s ruling, 37 states had begun to permit same-sex marriages.

Justice Kennedy, who wrote the majority decision, stated that gay couples could not be excluded from the fundamental right to marry under the Constitution. “No union is more profound than marriage, for it embodies the highest ideals of love, fidelity, devotion, sacrifice, and family,” he wrote in this historic opinion – and victory for proponents of gay marriage. “In forming a marital union, two people become something greater than once they were. As some of the petitioners in these cases demonstrate, marriage embodies a love that may endure even past death. It would misunderstand these men and women to say they disrespect the idea of marriage. Their plea is that they do respect it, respect it so deeply that they seek to find its fulfillment for themselves. Their hope is not to be condemned to live in loneliness, excluded from one of civilization’s oldest institutions. They ask for equal dignity in the eyes of the law. The Constitution grants them that right.”

Gay marriage has been legal in every Canadian province and territory since 2005; by 2003, eight out of the ten provinces and one of the three territories (which account for 90% of Canada’s population) had already legalized same-sex marriage. Canada granted the first a same-sex divorce (to a lesbian couple known as “M.M.” and “J.H.” in Ontario) in the world in 2004. So if history repeats itself, states in which same-sex marriages were not considered legal before the Supreme Court ruling could soon be facing their own first same-sex divorce cases.