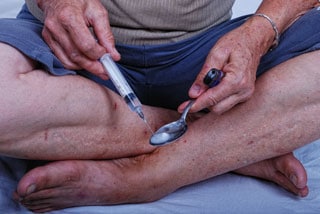 Like so many other parents who had come before the court, the young Ohio couple sitting across the table in a small conference room outside of the courtroom were facing an agonizing decision. Amid restraining orders and an impending court hearing, they had defiantly insisted that they could be good parents and care for their children. However, the lab results from a court-ordered drug test told a different story: an alarming number of illegal drugs were running through their veins at life-threatening levels.

The choice was stark: Give up custody of their children to grandparents by agreement or fight a losing battle before a magistrate, whose decision could be more limiting of their rights than the agreement negotiated with the grandparents. As I worked out the terms of the agreement to give my clients – the grandparents – custodial rights of the children, the addicted parents began to cry.

In that rare moment they were honest with themselves and with the grandparents. They admitted, “We can’t take care of them.”

The Opioid Crisis is a Public Health Emergency

Ohio has one of the highest rates of opioid abuse in the United States, but the problem is nationwide and growing. Last fall, the Department of Health and Human Services declared the opioid crisis a “public health emergency,” a move intended to build awareness and provide more flexibility for federal programs to target the issue.

Opioids are natural or synthetic chemicals that reduce feelings of pain. Opioids include the illegal drug heroin, synthetic opioids such as fentanyl and pain relievers available legally by prescription, such as oxycodone, hydrocodone, codeine and morphine. Because they produce euphoria in addition to pain relief, they can be misused. Regular use – even as prescribed by a doctor – can lead to dependence.

On average, more than 115 Americans die after overdosing on opioids every day. According to the Centers for Disease Control and Prevention (CDC), the clinical diagnosis of “opioid use disorder” or  “opioid addiction,” according to the CDC, is based on specific criteria such as unsuccessful efforts to control use or use that results in social problems and a failure to fulfill obligations at work, school, or home. As a result, custody battles involving children of parents who are abusing opioids are prevalent.

The Opioid Crisis: Protecting Children from their Addicted Parents

The number of children placed in the custody of relatives or in foster care has increased by 19% since 2010, according to an association of Ohio’s county-level children’s services agencies. As grandparents, siblings, and other family members try to protect children from addicted parents, these cases have become a crisis of their own, tying up the court system and overburdening children’s services agencies.

Within the last five years, I have seen a steady increase in these types of cases in my practice. As a family law and adoption attorney, I represent birth parents who have decided to place their child for adoption and grandparents who pursue custody of grandchildren because of the parents’ drug-related issues.

When it comes to the opioid crisis, there’s no stereotype for those affected. I am continually amazed by who I have seen struggle with drug addiction, including educated professionals and suburban mothers. Opioid abuse is found across all age groups and socioeconomic backgrounds. In some situations, a person may become dependent on pain pills that initially were prescribed by a doctor to treat pain from a sports related injury or back surgery. Unable to stop using the drugs, or to obtain new prescriptions from a physician, many addicts resort to going to the streets to buy the drugs illegally.

A parent addicted to drugs often neglects the needs of their children, which is why relatives step in to help care for the children. Family members seeking custody of children of drug-addicted parents first will need to determine whether the parents have been married and whether a domestic relations court order regarding custody is already in effect. This determines which legal avenue to pursue. When determining custody, courts look at what is in the best interests of the child.

For grandparents, stepparents or other relatives seeking custody of children in a household gripped by drug addiction, here are three important pieces of advice:

1. Document the time you spend with the children.

It’s important for family members to get involved in the lives of the children if they intend to pursue custody. Relatives who find themselves caring for children of drug-addicted parents should make notes of what they are providing and what the parents are not providing.

Are the children enrolled in school? If so, are they showing up for class? Have they been receiving proper medical attention? Do they make regular visits to the dentist and eye doctor, and are prescriptions kept up to date? That information is relevant when building your case about why you need legal decision-making authority on behalf of the children. It can be more difficult to get children health care without power of attorney or legal guardianship, which is why relatives often must pursue custody through the court system.

A parent may drop off children at their grandparents’ house and disappear for long periods of time, which is very common with drug users. Keep track of when the parents are gone and for how long. If the parents are not coming around to provide any financial assistance and are not taking the children to school or to the doctor, that helps build the case for a relative going to court to seek emergency custody so they can provide the immediate care that the children need.

2. Prepare for a heart-wrenching journey.

Sometimes grandparents think they want to start the process to take custody of their grandchildren, but they discover that they still are grieving over their own child who is addicted to drugs. They have a difficult time coming to terms with the possibility that their child may never overcome the addiction.

It’s difficult to go in to court to testify against your own child or sibling. When it’s time to confront the situation face-to-face with drug tests in a legal setting, there are some people who cannot follow through with it.

3. Expect a long and expensive process.

Families should recognize that it can take months before getting a decision in custody cases. I tell clients that it’s a marathon, not a sprint. Short of getting an initial decision of awarding temporary custody on an emergency basis, cases seldom get speedy resolutions.

The wait for a change is typically nothing new for families caught in these situations. Often, when grandparents come to me, they’re dealing with a child who has been struggling with drug use since he or she was a teenager and may have never been able to hold a job. Now with grandchildren in the picture, grandparents reach the point where they feel they have no other option but to seek custody to protect the next generation.

What’s Best for Families who have Fallen Victim to the Opioid Crisis?

While it’s important to continue to urge addicts to seek treatment, my experience has been that they only will get help when they want to get help. As much as relatives push the parents to stop using and putting their children in danger, they’re not going to stop until they are ready.

When they are at the depths of their addiction, a drug addict can tear a family apart with lies. Sometimes tough love is required. Getting law enforcement involved may be the last option but ultimately what is needed is to remove the children from the drug-addicted parents and place them in the custody of a relative with a safe and secure home.

Danielle M. Skestos is a partner at Isaac Wiles, based in Columbus, Ohio. A family lawyer representing clients in dissolutions of marriage, divorces, and custody matters, she concentrates her practice on adoption law, representing prospective adoptive parents and birth parents in private attorney adoptions, stepparent/relative adoptions, and private agency adoptions and a practice.www.isaacwiles.com