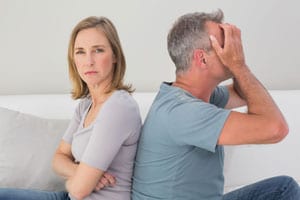 In 2015, Michael Rosenfeld, an associate professor of sociology at Stanford University, presented his findings that women initiate two-thirds of all divorces – a staggering 69% to be exact – at the Annual Meeting of the American Sociological Association. In “Who Wants the Breakup? Gender and Breakup in Heterosexual Couples,” Professor Rosenfeld discovered that there was a difference between married and unmarried heterosexual couples when it came to who initiated the breakup: in cohabitating relationships, women instigated the breakup approximately 56% of the time. This still begs the following question: “Why do women initiate divorce more than men?”

In my experience as a Women’s Empowerment Coach, I help women navigate the emotional turmoil of divorce. This would make me a pretty “pro-divorce person.” I myself divorced once. Usually, when a woman comes to me, they have already decided to divorce. But there are times that I wonder if that divorce was necessary, or was it just easier?

Last week, during my field research, I met a woman (OK, it was my makeup lady at Ulta) who

immediately started to describe her marital woes to me upon my telling her of my vocation. When she told her husband she wanted a divorce, he suddenly started to do all the things she wanted him to do all along. But in her words, “It was too little too late.” I then posed a question to her to try to get her to think harder about it: “What would happen if, instead of it being too late, you went all in? A last-ditch effort maybe, but without any strings, expectations – just pure love for your husband and your child.” She was quiet and even seemed a little annoyed.

I said, “I bet when he walks into the room he doesn’t have to say or do anything and you are already annoyed, just by him breathing.” This stirred a laugh, and she told me I nailed it. Resentment seeped into their marriage like the black plague, impossible to cure but much easier to escape. In a marriage, resentment can grow with every annoying comment, every roll of the eyes, and with every failure to connect. Resentment is a marriage killer.

Women Crave Connection, but They Don’t Know How to Ask for it

Women seek closeness and vulnerability in a marriage where, under the veil of marriage, it is safe to be real and raw with our chosen one, or soul mate. When she reaches out for that connected feeling and is met with the “wrong” response, she lays a brick down. Then one day, the wall is too high to penetrate it.

In its simplest form, deep down, women crave connection with their partners – but many women have the erroneous belief that if their husbands really loved them, they would instinctively know what their wives wanted, so a man needs to be a proficient mind-reader to know how to satisfy their wife’s need for connection. And what makes someone feel loved and valued varies hugely from person to person. For example, a dozen red roses every Friday may symbolize love and deep connection to one woman; to another, flowers mean nothing, but feeding and entertaining the kids so she can enjoy a long, peaceful bath means everything.

This is where the communication breakdown often occurs: women not saying what it is they want (“If he truly loved me, he’d already know what I want!”), and men not “getting it” (“I can’t do anything right as far as she’s concerned, so I might as well stop trying!”) So resentment festers and the walls go up.

The internal process for a woman usually starts with her wondering why she is so unhappy. She works on herself by reading self-help books. Maybe she seeks counseling, starts exercising, or does some form of self-development. At some point, she feels a little better, but something is still off. She may feel lonely, so she looks closer at the marriage.

Whether or not there is infidelity, there is usually a point the woman reaches out to her husband to help “fix” things. Usually, the husband hears this and turns the blame back on the wife, or he somehow resists the criticism. After all, he thinks everything is just fine. Rarely does he hear it as the cry for help that it really is?

When fixing the marriage is met with resistance or even denial, the wife starts to think that a divorce is the only way to go. If he is not willing to work on it, then what else is she to do? This is the pivotal point where the word “divorce” is initiated into conversations.

Making the decision to divorce is never easy. By the time a woman says the words “I want a divorce,” she has most likely mourned the marriage and moved on, making it too late for reconciliation. This may leave her husband pretty blind-sided.

Even though the husband may feel a lot of grief, he still inflicts shame and blame, adding fuel to her fire. They both only see the faults that their spouse brings to the table, and refuse to look in the mirror.

Unfortunately, the last-ditch effort made by the husband often comes off as a little schizophrenic – or like Dr. Jekyll and Mr. Hyde. One moment he is buying her a meaningful gift, and the next moment he is furious and blaming her. The couple may even go to counseling, only the madness continues because he is unable to look within for the changes needed. The marriage is unraveling fast now. Then and only then, she can no longer handle the anger, and the separation begins.

But what about the makeup lady whose husband really made the real effort? If only she could set aside the blackness in her heart that resentment built, scale that brick wall between them. If he could find a way to connect with her.