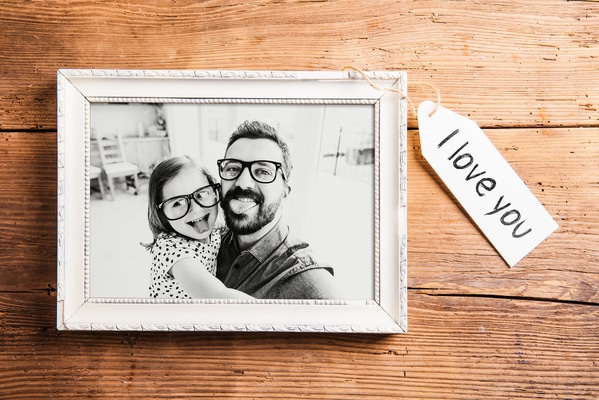 Ava and Suzie are both 10 years old and live just a few miles apart. Unfortunately, both their sets of parents are divorcing. Research shows that Ava will likely have difficulties but adjust pretty well because she has equal time with both of her parents, who themselves have shared responsibility for her. Suzie, however, may have to watch her parents fight as they spend too much money on legal bills and become angrier with each other.  Eventually, one of Suzie’s parents, most likely her dad, will basically become an every-other-weekend visitor in her life. That’s a sad present for a dad on Father’s Day – and for Suzie.

What will cause the huge difference in the girls’ lives on Father’s Day?

Each girl loves both her parents and all the parents are good caregivers. The difference is caused, believe it or not, by the few miles between them. Ava lives in Kentucky, where a law was passed last year ensuring that children of divorce get to see both parents equally. Suzie lives in Missouri, where the lack of such a law drives parents to fight tooth and nail to “win” custody if they are to continue in their full parenting role.

Kentucky’s law, the first real shared parenting law in the nation, passed just one year ago and has a presumption that both parents have equal decision making (“joint custody”) and parenting time. This arrangement is true shared parenting. Decades of scientific research show this is generally the best arrangement for children in divorced families. Kentucky’s law excludes parents who are likely to abuse or neglect a child, of course. But for the vast majority of families, both parents can be assured of a full continuing parent/child relationship.

In contrast, Missouri’s law is based on the court choosing a primary custodian for the children. In other words, one of Suzie’s parents stays a real parent. The other one is pushed to the edges of her life and only gets to see her during what is often limited “visitation.” Suzie wants to stay close to both of her quality parents but the state of Missouri makes this difficult unless the parents both agree to it from the outset. When they don’t, Missouri drives them to put on their boxing gloves and fight with everything they have. It’s no wonder so many good people, and their children, go through tough divorces.

This past May there was hope for Suzie and all of Missouri’s children when State lawmakers considered a presumption of equal parenting time. House Bill 229 made it through the House and a Senate Committee, but failed to be brought up on the Senate floor for a vote because lawmakers ran out of time. This dealt a devastating blow to children in Missouri, who need and deserve both parents just like their friends in Kentucky.

And why wouldn’t Governor Parson of Missouri and other lawmakers support shared parenting? Kentucky’s House passed the law 81-2 and its Senate passed the law unanimously. Research has shown that equal parenting time is best for children of divorce, second only to an intact family. Polling consistently shows that the public supports shared parenting. Divorce doesn’t eliminate the family, it just rearranges it. Children still need the love and attention of both parents and extended families.

Many states now have legislation in the works because children of divorce should not have to feel abandoned by one parent and parents should not have to fear losing contact with their children. We encourage anyone interested in doing right by our children to send an email to your Representative or Senator and ask them to support equal shared parenting. To learn how, visit the National Parents Organization website today.

This Father’s Day – and every day – the question to ask is this: when it comes to parenting children, should it really matter which state you live in? Every state in the nation should follow Kentucky’s lead and give children what they need and want – both parents.