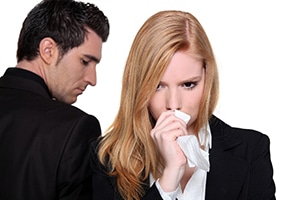 There is a difference between having disagreements with your partner and emotional abuse. If your partner is emotionally abusive to you, he may:

his type of behavior by your partner can leave you feeling out of control, weak, and/or humiliated. You may feel like you have to walk on egg shells to avoid confrontation and try to have to anticipate his moods and in order to keep the relationship at peace. You may also feel pressured into having sex and confused as to where you stand in the relationship. Basically, you may feel as though you are on a roller-coaster ride of good and bad times, and often you may even feel afraid and isolated from others. Emotional abuse usually happens slowly as a relationship progresses until one day you realize what’s happening and have to deal with it.

One single mother told me that while contemplating a divorce from her verbally abusive husband, her friends (at the time) told her she was crazy. They would say, “you’re gonna give up that nice vehicle… you won’t be able to have a house on your own.” She said that she realized that her number-one responsibility was to raise her son well and “everything else was secondary.” She said that today, although they live in a small apartment and she struggles with a busy schedule, she has a great job, good friends, and is much happier than before. She says, “I had to go it alone. It’s so much more important that [my son] sees me happy and that I teach him that material things don’t matter as much.” As you can see in this example, as hard as we try to improve our awareness and self-image, when you love someone, it’s easy to be blind to the existence and effects of emotional abuse.

It is important to remember that emotional abuse can also be traumatizing. When something bad happens to you, if you can’t resolve it in your mind or convey its intensity to others in order to get help, it probably caused you some sort of emotional damage. Emotional abuse is also harmful to a woman‘s self-esteem. According to the website Thisisawar.com (an educational resource which helps people deal with illness, grief, pregnancy, debt, and other personal issues), emotional abuse can have “serious physical and psychological consequences for women, including severe depression, anxiety, persistent headaches, back and stomach problems.” Other symptoms include panic attacks, irritability, emotional numbness, eating irregularities, and insomnia. So how can you determine how much damage was done to you, and how can you fix it?

Scientists now have the technology to examine the brain and read the damage caused by emotional abuse through brain scans. According to recent research, these scans reveal such a trauma actually “changes the structure and function of the brain, at the point where the frontal cortex, the emotional brain and the survival brain converge.” One of their major findings was that scans of people who had experienced emotional abuse were similar in “structural and functional irregularities” to people diagnosed with Post Traumatic Stress Disorder.

If you feel you are or have been a victim of emotional abuse, there is help. First, if possible, remove yourself from the abusive situation. If you can’t, then you should surround yourself with a network of people — family and friends — who can help you cope in such an unhealthy and often dangerous situation. You should also talk to a professional who will know how to help you through analysis and counseling. Under these circumstances, a professional will help you decide the best course of action for you. Couples therapy may be an answer or you may discover that it’s time for you to leave.

This brings up an interesting point. It’s very difficult for a lot of women to move on. I know several women who have stayed for years with partners who were abusive, neglectful, and unfaithful. Women who say they can’t leave (besides having very low self-images) usually have long-standing erroneous beliefs that keep them tied to these undeserving men. Some of these women believe that they cannot abandon their dysfunctional partners; that these men somehow need them in order to survive. Oh, really? If those men really needed them, they would fear losing them and smarten up! Some women tell themselves that their partners will change and eventually recognize their value and love. Wrong. That outlook puts off happiness and fulfillment until “someday”, which is when exactly? And deep down, do they believe it will ever really happen with this man? Other women believe that they will never find another man to love them so they stay with their abusers even though they are extremely unhappy. Why? Classic low self-esteem — even if this were true, I believe that a woman can be alone and happy (I was), which is far better than feeling miserable sharing your life with a sadistic man! Don’t make these mistakes. Acknowledge your value as a person who deserves love and respect. Recognize when something is really over.

One important thing to keep in mind is that the people in your life whom you love should make your life easier and add to your joy, not take away from it. Ask yourself: are you more often upset and confused than you are peaceful and happy? If so, then something is not right, and you should remedy the situation. If world events of the last few years have taught us anything, it’s not to waste a moment of life. Do what it takes to make yourself happy. Above all, be true to yourself. If you follow your heart, and you love honestly and openly, you will at the very least know that you gave your all and will have no regrets.

This article has been edited and excerpted from Boot Camp for the Broken-Hearted (New Horizon Press, 2008) by Audrey Valieriani. Based in Jamaica Plain, Massachusetts, Valeriani is the creator of TheAccidentalExpert.com, which provides relationship coaching.