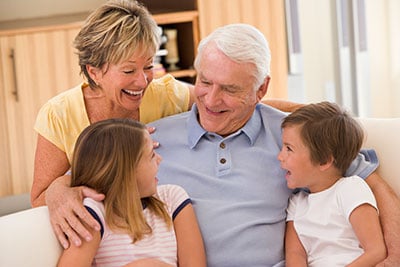 According to the 2010 Census, 4.9 million children live with their grandparents on a full-time basis. That number is roughly twice as high as the 2000 figure. Moreover, there are most likely millions of other grandparents who provide significant amounts of financial and/or emotional support, and although the commitment does not quite rise to the level of full-time caretaker, it is very close. Finally, it is not unusual for children to spend significant amounts of time with their grandparents, and in most cases, the grandparents are active caregivers as opposed to passive babysitters. For these reasons, it’s important to know the visitation rights in California which grandparents are entitled to along as grandparent custody rights.

The reasons for these connections between grandparents and grandchildren are as varied as the families themselves. In many cases, the parents cannot safely care for their children, and the grandparents step in to fill the gap. In other situations, the children’s parents spend significant amounts of time with their own parents, and so these values are passed on. Longevity may be one common denominator, because as the saying goes, “80 is the new 60” and older adults are much more physically active than they have been in previous generations.

Divorce can break the bonds that took years to form. Many times, Father may keep the children away from Mother’s parents in order to “get back at” other for the divorce. In other situations, grandparents may have legitimate concerns about the ability, or willingness, of their children to adequately care for their grandchildren. What options and custody and visitation rights in California do grandparents have in these situations?

To resolve these questions, the court often looks to the nature of the bond between grandchildren and grandparents prior to the divorce or separation. Some relevant inquiries include:

Amount of Nurturing: Did the grandparents help with homework, provide meals, take the children to the doctor, supervise bath time, and do other things that parents normally do?

Children’s Preference: If the children are older, have they expressed a desire to spend more time (or less time) with their grandparents?

Grandparent Capacity: As mentioned earlier, grandparents often can be more physically engaged with their grandchildren, but are such circumstances present in this particular situation?

Nonpayment of support (i.e., the grandparents stopped sending money, so the parents cut off visitation), temporary relocation, and lifestyle disagreements are not relevant. In the end, most courts look at the totality of the circumstances and determine whether visitation is in the children’s best interests and whether the evidence is sufficient to overcome the parental presumption.

Section 3103 actions are more common in these situations because they are relatively easy to prove and many grandparents simply want to spend time with their grandchildren. In other cases, a Section 3041 custody action may be more appropriate.

There is a threshold issue, in that the grandparents (or almost any other non-parents who seek custody of minor children) must prove that allowing the natural parents to have custody would be “detrimental to the child.” Note that proving a detriment to the children is not the same thing as proving that the parents are unfit. The statute defines “detriment” as:

Harm of Removal: In order to obtain legal custody, the grandparents must first have physical custody of the grandchildren, and as examined below, such a determination is far from clear cut.

Substantial Care: The statue says that the grandparents must have been the primary caregivers for “a substantial period of time.” This gets tricky, because many times, there are three generations living together in the same household, and it is not exactly clear who is paying the bills and who is providing emotional support.

If the grandparents can prove detriment, they must also establish that custody is in the children’s best interest, under an analysis similar to the one in Section 3103 cases.