Father’s Day is a great time to reflect on the importance of dads in the lives of their children after divorce. Society perpetuates a negative view of dads after a family dissolves. Experts agree that fathers and their children suffer from assuming the worst about divorced dads.

In fact, all reputable social science research shows that children are better off having maximum contact with both of their parents post-divorce, according to author Grant Brown. So instead of marginalizing divorced dads, let’s celebrate all of their accomplishments!

Larson continues: “And then there are single dads, about 1.8 million in the United States – a 27 percent jump in the past decade, according to the latest census. Of those single-father families, 46 percent are divorced, and another 19 percent are separated. That’s about two-thirds of all single-father families – a pretty substantial portion of men taking their children to ballet classes or Little League practice.”

What’s in the best interest of children after divorce? Dr. Joan Kelly, a renowned psychologist and parenting researcher, confirms that the outcomes for children of divorce improve when they have equal access to both parents. These include better psychological and behavioral adjustments and enhanced academic performance. Clearly, research demonstrates numerous benefits to children when their living arrangements enable supportive and loving fathers to be actively involved in their lives on a regular basis – including overnights.

In my attempt to understand the obstacles faced by single dads after divorce, I interviewed several dads and daughters who blog on my website. The following comments came from these individuals when asked to define a “competent dad.”

The divorced dads who blog on my website are strongly motivated to build strong bonds with their children. For instance, Matt, in his late forties, never remarried after his five-year marriage to Brianna dissolved. He made his relationship with his daughter, Marissa, a priority. Having been raised by a single mom and rarely seeing his father, he has felt the sting of parental absence and he doesn’t want Marissa to experience feelings of sadness and longing for her mother.

Matt describes his split from his ex-wife as contentious, saying, “I make a point of recognizing that I’m going to do whatever is in Marissa’s best interest. Brianna left suddenly when Marissa was four and she has trust issues. But even if I’m getting a lot of flak from her mom, I’m not going to be a disruptive element in Marissa’s life (since her mom is back in the picture). On the other hand, she has been through a lot so if Brianna’s parenting time becomes unpredictable, I’ll have to step in.”

Marissa, age ten, lives with her father and spends every other weekend and one weeknight with her mom. Matt has worked hard to reduce conflict with his ex-wife and reports swallowing many words and biting his tongue in an effort to keep the peace. With intensity in his voice, he explains, “I always say to Marissa, we will do what works for you – to help you feel connected to both me and your mom.”

One of the biggest challenges Matt and other dads face is the stereotypes that exist about divorced fathers. It’s crucial to examine our beliefs and attitudes about the role of dads after divorce if we are going to break down barriers that create distance between fathers and children. In my opinion, fostering alienation between a child and his or her dad is one of the cruelest and most selfish acts a parent can do to their own child.

The Father-Daughter Relationship After Divorce 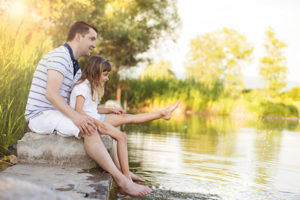 In a divorced family, there are many ways a father-daughter relationship may suffer. Based on her research, Dr. Linda Nielsen found that only 10 to 15 percent of fathers get to enjoy the benefits of shared parenting. She also discovered that divorce often damages a daughter’s relationship with her father more than a son’s. This can be explained by the fact that boys tend to spend more time with their father after a family dissolves.

Nielsen explains that while most daughters of divorce are well-adjusted several years after their parents’ divorce, many have damaged relationships with their fathers. Unfortunately, if the damage is severe, a girl can grow into adulthood with low self-esteem and troubled relationships with men.

For the most part, a good relationship with an intimate partner is strongly tied to a woman’s relationship with her dad.  A father’s presence (or lack of presence) in his daughter’s life will affect how she will relate to all men who come after him and can impact her view of herself and her psychological well-being.

My research for Daughters of Divorce spanned more than three years and was comprised of 327 interviews of young women who reflected upon their parents’ divorce. The most common themes that emerged from these interviews were trust issues, and a wound in the father-daughter relationship. My previous study published in the Journal of Divorce and Remarriage concluded that lack of access to both parents and an inability to deal with conflict in a constructive manner were associated with low self-esteem in young women raised in divorced homes.

What are some of the barriers that prevent dads and their children from maintaining a close bond after divorce? Many experts cite the importance of a divorced mom promoting her children’s relationship with his or her father. Whenever possible, mothers need to encourage their children to sustain regular contact – such as phone calls, holiday time, and special occasions when separated from him.

What all children need is a loving, predictable father figure – whether married to her mother or divorced. This Father’s Day, let’s celebrate single dads who make their children a priority!