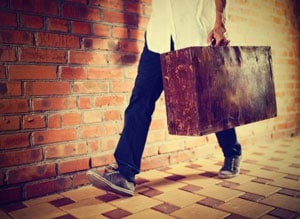 One of the most common questions asked of divorce lawyers by potential clients during the initial consultation is, “Should I move out?” The answer to this question will undoubtedly vary based upon the individual facts and circumstances of each case.

In the tragic situations where the client and/or the children are victims of abuse or domestic violence, the answer is an unequivocal “Yes!” No matter what the legal or financial ramifications of the move out may be, there is no justification or rationalization for a person to expose him/herself and/or his or her children to danger or harm. The only option under such circumstances is to escape to a safe place and immediately seek a restraining order.

But when abuse or violence is not involved, there are three very important considerations to take into account before leaving the family home.

1. Leaving the Family Residence Can Negatively Impact Your Ability to Obtain Child Custody

The Family Law Court will look closely at the current status quo if the parties are unable to reach an agreement regarding child custody. If one party has moved out of the family residence, then the other spouse can claim that the moving spouse has abandoned the family (even if they are actually a committed parent). They can then claim that the status quo is that they are the primary custodial parent.

This can have devastating consequences, which can include one parent losing out on valuable custodial time with his or her children as a direct result of the move out. Keeping this in mind, I generally advise clients with children to postpone the move out until after a written agreement or stipulation has been entered into regarding the issue of child custody.

Furthermore, the emotional impact that the move out can have on the child can be devastating. So, if it is financially feasible, couples should consult with a licensed therapist, social worker, or other experienced mental health professional to come up with a plan for presenting the move-out plan to the child in an appropriate and responsible manner before it takes place.

2. Moving Out Can Strengthen Your Position on Financial Issues in the Divorce

The issue of division of marital property between spouses is often the most intensely litigated issue of the divorce.   Each state has its own approach to this issue. Many states place a great deal of emphasis upon the “date of separation” in connection with the determination of whether property is marital property to be divided among the spouses.

In California, the earnings and property accumulated by a spouse while he or she is “living separate and apart” are that person’s separate property. See California Family Code Section 771. This means that the income earned and the property accumulated while the person is “living separate and apart” is that person’s separate property, which will not be divided with the other spouse.

Therefore, the action of moving out of the Family Residence may lead to financial consequences that will directly affect the division of marital property. The specifics will vary on a case-by-case basis and should be discussed in-depth with an attorney during the initial consultation.

3. The Costs of Maintaining Two Separate Households May Not Be Feasible

Today, it is quite common for couples to continue living with one another under the same roof, but in separate bedrooms, even after divorce proceedings are underway. I can specifically recall one case where both parties arrived at the exact same time to a court proceeding because they had decided to carpool together from their shared house!

Such an arrangement may be the only financially viable option given the extreme financial burden of maintaining two different homes. It is certainly difficult for divorcing couples to manage to pay for mortgages/rents, utilities, groceries, etc. of two separate households.

But, engaging in such an arrangement could have financial consequences. The California Supreme Court recently held that the income of one party was not his separate property during the period of time that he and his wife continued to live under the same room, even though they were clearly no longer in a committed marriage with one another. See In re Marriage of Davis (2015) 61 Cal.4th 846.

Before any decision is made as to whether or not a divorcing party should move out of the Family Residence, it is imperative to consult with an attorney and/or a financial planner to assess whether and when the move should take place.

I am very passionate about family law because I was a child of divorce. I have had seven divorces take place within my family, and I am a father of two young children. I am sensitive to and fully appreciate the emotional costs that go along with any matter involving children. I make it my personal mission to achieve the best solution possible for all of my clients, regardless of their economic status. To do so, I make myself available 24/7 and give every client my personal cell phone number.
When you hire me, I will be directly involved and accessible to you 100% of the way from our first meeting until the matter concludes, whether that is through settlement or trial. I consider it my duty to make sure that my clients fully understand the risks and benefits of every decision in a case and that all of their questions are answered. I have a background in accounting and finance, which makes me uniquely qualified to handle complex financial issues while at the same time explaining them to my clients in a clear and straightforward manner. If you are facing a family law issue, please feel free to contact me:
Law Offices of Matthew Smurda1999 Avenue of the StarsSuite 1100, Los Angeles, CA 90067424-253-1177