The world is constantly changing ⁠— sometimes for better, and sometimes for worse. Today, we take a look at how divorce law has changed the rules surrounding fault, both then and now.

How Divorce Law Has Changed Over the Years: Then vs. Now

When I started practicing family law many years ago, divorce in most of the United States was based upon fault. In order to obtain a divorce, one spouse had to be guilty of adultery, abandonment, emotional or physical abuse, or some other form of mistreatment. Often this required collusion between the divorcing spouses in order to meet the statutory fault requirements. Many states required a long separation period before a divorce could be granted. In many cases private investigators were brought in to catch a wayward spouse in the act with another man or another woman. Consent of the innocent spouse was often required before a divorce could be granted.

Divorces often took years before they were resolved. The courts would often not try to cool things down but would permit the issues to fester and the pot to boil.

People were still fighting about children, money, and property, but fault was a critical ingredient in the mix.

The Introduction of No-Fault Grounds for Divorce

In the 1970s, many states started to bring in no-fault grounds for divorce, with the result that during that decade alone old divorce laws were amended or repealed in 37 of the 50 states.

In Michigan, where I practice, the divorce laws were changed in the early 70s to have one ground for divorce: The court must find that there is a breakdown of the marital relationship to the extent that the objects of matrimony have been destroyed and there is no reasonable likelihood that the marriage can be preserved. The result is that if one spouse wants a divorce and the other does not, a divorce still must be granted.

Shortly after the laws were changed in Michigan, a woman came before a judge to have her divorce granted. At that time no one was sure as to what was required for a divorce to be granted. The judge kept asking the woman questions as to why she wanted a divorce. The attorney and the client would respond that the marriage had broken down and there was no chance of saving the marriage. The judge kept wanting more and more details until finally the woman blurted out that she hated her husband’s f-ing guts! The judge then said, “Divorce granted!”

Fast forward to the present, divorces are routinely granted. Basically, the court will want to know if there is any chance of a reconciliation or any possibility of the spouses continuing to live together. If not, the marriage will be terminated and a judgment of divorce entered.

What about fault? In most states there is still some type of fault. The result, for example, in Michigan is a hybrid. The marriage is over based upon the breakdown and the fact that one spouse wants a divorce. Issues such as property division, child custody, and spousal support/alimony are still based upon many factors, including fault.

Fault Does Not Have a Bearing on Divorce

What does this really mean? In most divorces, the arguments involving fault do not have much bearing on property division or spousal support. In most situations, marital property is divided on an equal basis. I have found that fault can have some bearing, but it must be pretty egregious. For example, I represented a woman a number of years ago who was pregnant. She and her husband had been having some serious marital problems and then reconciled. He had been having an affair. During the reconciliation, the wife became pregnant and so did the husband’s girlfriend. So much for the reconciliation! In that case, fault came into play, and instead of a 50-50 property division, my client received 60% of the marital estate.

The problem is that, in most cases, we have a he said-she said situation. Was the marriage bad before the alleged affair or did the affair cause the breakup? We are also dealing with a legal system where judges preside over thousands of divorces and become jaded. The result is that it takes a lot to shock a judge’s conscience.

The Decrease in Stigma Surrounding Divorce 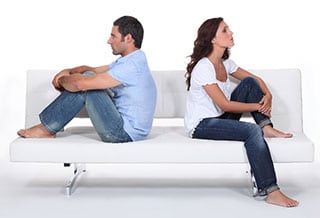 Today, there is a lot less stigma in going through a divorce than there was 30 or 40 years ago. People marry more times, life is longer, and people marry and divorce for almost any possible reason.

There are movements to bring back fault in many states. The arguments are that divorces are too easy to obtain, that the victims are not protected, and that fault should be a factor. The reality is that no fault is much better than fault as a major basis for divorce. Bringing back fault and going back to the mid-20th century would not serve anyone well, and just goes to show how divorce law has changed over the years.

If we fast forward to the future, my hope is that we eliminate the system where there is someone suing the other for divorce and just state in the matter of Jane and John Doe without making the situation adversarial from the start with pleadings saying Jane Doe vs. John Doe. Try to make divorces as non-adversarial as possible.

Divorce is a process; it is painful. The goal of the legal system should be to make it as easy and painless as possible without having anyone lose his or her legal rights.

We now live in an era of alternate dispute resolution and trying to keep people out of court. These are all good, as is the idea that divorce should be a last resort and saving a marriage through marriage counseling or other means should always be encouraged.

These are some of my thoughts. What are yours? Please share them with me.