In family law, a forensic psychologist can work as a custody evaluator appointed by the court, or as an independent consultant for one of the parties in a divorce case.

Forensic psychologists have comprehensive, hands-on training in clinical psychology. In addition to completing a four-year college degree, they must earn a master’s, usually in a related field, and a doctoral degree (PsyD or Ph.D.). This process can take six years or longer.

After finishing a doctoral degree, an aspiring forensic psychologist must obtain state licensure, which requires a number of supervised clinical hours and an exam. However, depending on where a practitioner lives, further education may be needed to become a child custody evaluator. To become an independent consultant, establishing a reputation and networking among family law attorneys will suffice, though obtaining training specific to custody and child matters would be advisable.

What does a forensic psychologist do in child custody cases, as an evaluator or a consultant? Read on for a rundown.

Here’s What a Forensic Psychologist Does in Child Custody Cases

The rules vary from state to state, but to be eligible for court appointment as a child custody evaluator, a forensic psychologist must have several years of postgraduate experience diagnosing and treating mental disorders. Additional training may be required in custody and child development, depending on the jurisdiction.

Other mental health providers can serve as custody evaluators, but forensic psychologists are usually called in for complex cases, such as when claims of child abuse or drug addiction arise in custody cases and the veracity of either parent is in question. They use investigatory techniques, psychological evaluations, examinations, and scientific rigor to discern the best situation for the child.

Upon completing their evaluation, forensic psychologists carefully document their findings and provide them to the court for the judge’s consideration. The court may agree or disagree with the evaluator’s report, but their opinion is entered into the record as part of the court proceedings.

Being a psychological consultant for a family law attorney can also involve other responsibilities, such as:

Forensic psychology child custody evaluations involve in-depth psychological analysis of the relationship between a child and each of their parents. A forensic psychologist or other licensed mental health professional will use direct and indirect methods to obtain information, investigating family dynamics, assessing school performance, and conducting interviews with siblings to gather data.

When a custody evaluation calls for psychological tests, forensic psychologists consider which tests will be developmentally, culturally, and linguistically appropriate in a given situation, and fully disclose a test’s limitations when offering results.

Forensic psychologists concerned about a child’s well-being in high-conflict custody situations must initiate timely and inclusive evaluations, interventions, and court actions with the goal of repairing and healing parent-child relationships.

Forensic psychologists consider data in context, relying on their professional ethics and experience to guide them in making — or declining to make — recommendations in a child custody case.

The Different Types of Child Custody

How Long Does a Child Custody Evaluation Take? 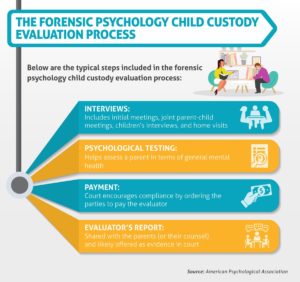 Parents at the beginning of this process and eager for resolution may be asking themselves, just how long does a child custody evaluation take? There is no easy answer. The length of a custody evaluation varies depending on the state, situation, and level of urgency.

For example, some jurisdictions restrict the scope of an evaluation, which speeds up the process. Other jurisdictions allow for what are referred to as partial or limited-scope custody evaluations. These evaluations are focused on certain issues or complaints, and they do not include full psychological testing, though basic tests may be administered. If a partial child custody evaluation is ordered, it will take less time than a full evaluation by a forensic psychologist.

Forensic evaluations by their nature require time. The process of gathering information, conducting interviews, interpreting data, and rendering an assessment can last anywhere from three to five months.

A forensic psychologist’s report does not always include a recommendation on custody. When they do make recommendations, they must be supported by solid psychological evidence and focused on supporting the best interests of the child.

This article has been excerpted and edited from “What Do Judges Look for in Child Custody Cases?” (Maryville University, 2021) by the Online Bachelor’s in Forensic Psychology & Criminal Justice Department. The full guide is available here: https://online.maryville.edu/blog/what-do-judges-look-for-in-child-custody-cases