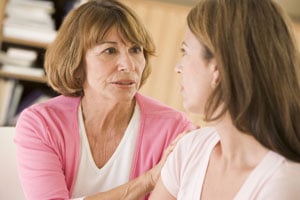 Most of the friends I had growing up were children of divorce. I, on the other hand, am an adult child of divorce. Some of my friends had single mothers, others had stepparents, and others were shuttled back and forth between their parents’ houses throughout the month. My parents, however, were happily married — hell, they never even fought. I considered myself to be one of the lucky ones.

They divorced after 30 years of marriage.

At age 28, I found myself strangely unequipped to handle my parents splitting up. I thought that being an adult would make it easier, but instead, I was left feeling completely disoriented. I tried turning to my friends, but my situation was so unlike theirs that they could only empathize — advice was off the table.

In the three years since my parents went their separate ways, I’ve learned a number of things that I’d like to share in hopes of helping other adults who may be grappling with their parents’ divorce.

5 Things You May Face as an Adult Child of Divorce

1. Your Emotions Will Confuse You

In the face of such a catastrophic upheaval, we expect small children to lash out — and answer their outbursts with unfailing patience. Parents going through a divorce buy books, go to support groups, and seek professional help, all in an attempt to guide their children through one of the most painful times in their young lives.

Adult children receive no such support. There’s no one there to soothe us as we suffer our own tantrums and tears, and more than anything, we’re expected to simply “get over it.” That feeling often manifests from within as well, which only serves to make things worse.

When my parents divorced, I felt angry, betrayed, hurt, and heartbroken. I grieved the end of their marriage as if I had lost a loved one. I also felt that since I was an adult, I shouldn’t be so overwrought. Internalized doubts over the validity of this grief kept me from seeking professional help, and as a result, my mental health suffered considerably.

I’m here to tell you that your emotions will run the gamut from sorrow to hope. You’ll be filled with rage, want to throw things, and scream until you’re blue in the face. You’ll cry, and mourn for your lost innocence. There will be days when you won’t want to get out of bed, when you’ll question whether or not love is real, and why humans marry at all. You’ll wonder if your parents’ love was ever genuine, and you’ll examine your childhood through a lens of cynicism and anguish. You’ll hate them for divorcing, but you’ll also feel their pain, as you understand why relationships sometimes fall apart. You’ll feel relieved and you’ll feel guilty.

And it will pass.

Take time to talk to someone who understands, be it a therapist, support group, or a friend who’s gone through the same thing. Don’t suffer in silence! Working through these emotions is healthy, and will ultimately lead you to feeling better far sooner.

2. You’ll Be Treated as a Confidante Instead of a Child

As children pass into adulthood, they usually develop a solid friendship with their parents, one built on years of trust and caring. While this friendship deserves dedication and preservation, it can become a serious burden during your parents’ divorce.

Friends lean on you when times are tough. They vent their anger, cry on your shoulder, and seek advice and support. However, when that friend is a parent, and the frustrations that come pouring out concern your other parent, you find yourself in a tough spot. And it’s not just your parents’ feelings you’ll be subjected to, you’ll also be treated as a go-between, shuttling messages and belongings back and forth until your head spins.

So, how can you remain supportive without being torn in two?

3. You May Have to Get Tough

In order to protect your own mental well-being, you’ll have to put your foot down and set some clear boundaries. It’s a hard thing to do, believe me, even as an adult child of divorce, but you need to explain your position to your parents. Be gentle with them, but let them know that you can’t be the friend they come to when they need to talk about the divorce. Make it clear that by airing their dirty laundry in your presence, it only causes you heartache. Point them toward their other friends or a therapist, if they’re not already seeing one. As an adult, it might be easier to communicate this as opposed to being a child caught in the crossfire.

4. There Are Unexpected Consequences

Your parents’ divorce will hit you with more than just jumbled emotions; it may actually end up costing you money. When my mother moved out of her home of 20 years, she only had her clothing — no furniture, no dishes, no electronics, nothing. Naturally, I did what I could to help. What I couldn’t give her outright from my own belongings, I helped her to buy.

To remove my mother’s name from the mortgage (to free her from any liability), my father had to refinance the house. I had no idea, but this is a common procedure in many divorces. In order for the refinancing to go through, the house had to appraise well, which meant a lot of fixing up. I spent many weekends with my father, purchasing supplies and putting the family home back in order.

I never expected their divorce to cost me money, but it did. I wasn’t obligated to pay for anything, mind you, but as an adult child of divorce, this was a unique position and I felt it was the least I could do.

5. Seeing Your Parents with Another Partner Is Hard

Give yourself leeway when dealing with your parents’ new relationships. Though your parents may feel overjoyed with the prospect of new love, you’re more likely to feel as if this new person is an interloper in the family. It’s okay to feel angry, and it’s okay to not want to deal with that anger. Take the time you need to process those feelings.

My mom hasn’t dated since the divorce — but my father had a girlfriend within a few months of my mother moving out. I didn’t take it as well as I’d hoped; in fact, I was chilly at best, openly hostile at worst. It took me two years to warm up to my dad’s girlfriend, and even now—as an adult child of divorce—I often feel like I’m betraying my mom when I’m friendly with Jeanie.* However, I’m glad I didn’t force myself to be more welcoming than I felt at the time, as it would have only served to deepen those feelings of hostility. By giving myself time to adjust, I’ve created a stronger bond between the two of us.

Being an adult child of divorce comes with a lot of unique pitfalls. Although you have the ability and maturity to understand your parents’ divorce, you’ve also built an entire life based on their union. Letting go of that is no easy feat. The best advice I can give is to let yourself feel what you feel, talk to a therapist or support group, and give yourself plenty of time to heal.

Liz Greene is a writer, dog lover, and rabid feminist from the beautiful City of Trees, Boise, Idaho. She spends her free time reading comic books, baking cakes, and coming up with wild Game of Thrones fan theories.