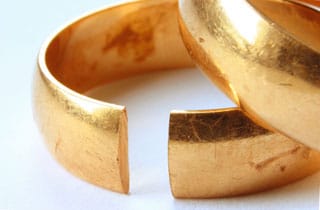 Three rabbis were sentenced to prison earlier this week after being found guilty of having a role in a coercion ring that involved kidnapping and torturing Orthodox Jewish men who were refusing to grant their wives a religious divorce.

In Orthodox Judaism, Jewish women can be granted a civil divorce, but without being granted a get by their husbands, their children are considered illegitimate and they cannot remarry. A woman can sue for divorce in rabbinical court, and if a husband still refuses to grant a divorce, various penalties may be placed on him in order to pressure him into providing a get.

After hearing about three other instances of men being tortured into agreeing to a divorce, the FBI had an undercover agent pose as an Orthodox Jewish wife who wanted a get from her husband. Another FBI agent went undercover as her brother. The two met with the ringleader, Rabbi Mendel Epstein, in New Jersey. According to a criminal complaint by the FBI, Epstein “admitted to planning, approving and committing numerous kidnappings and coerced gets.”

In October 2013, several locations were raided by the FBI in New York and New Jersey. Ten men were arrested for being involved in the ring, including three rabbis: Jay Goldstein, Binyamin Stimler, and Epstein.

Based on the complaint, Epstein would charge thousands of dollars from wives and their families to commit kidnappings and violent acts against uncooperative husbands. According to prosecutors, the team used items such as handcuffs and electric cattle prods to torture the men and get them to grant their wives religious divorces.

On Tuesday, U.S. District Judge Freda Wolfson sentenced Epstein, 70, of Lakewood, New Jersey, to a decade in prison and Stimler, 40, of Brooklyn, to three years and three months. Goldstein, 61-year-old Brooklyn resident, was given an eight-year prison sentence on Wednesday.

Wolfson stated that of the $60,000 Epstein had collected from the undercover agents, only a small amount was given to the men whose job it was to torture the fictitious husband.

The three rabbis were convicted of conspiracy to commit kidnapping and attempted kidnapping. Goldstein’s two sons, Avrohom Goldstein and Moshe Goldstein, were sentenced in November.

Epstein’s attorney plans to appeal the conviction despite Wolfson stating that Epstein’s ten-year sentence was necessary in order to deter other members of the Orthodox Jewish community from committing the same acts.