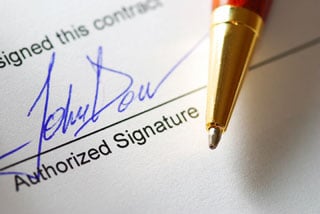 Most people take marriage and hold high hopes for their new relationships. Little wonder then that prenuptial agreements aren’t high on any betrothed’s desirability list. After all, thinking about a prenuptial agreement is often feared akin to planning the end of a relationship before it’s even begun. But in these times of soaring divorce rates and uncertain financial stability, it only makes sense that people should be concerned with such practicalities, dreary though they may be. While deciding between or a Mediterranean honeymoon is undoubtedly more pleasurable, if there’s any uncertainty about your forthcoming marriage, financial or otherwise, then you should consider creating a prenuptial agreement.

Simply put, a prenuptial (also known as an antenuptial) agreement is a legal agreement signed by you and your future spouse. Normally, they deal with straightforward financial and legal issues in the event of a divorce or a death — what will be done with the house, any stocks, bonds, or other such marital assets. They might also include some extras like custody arrangements, spousal support, or even what happens to the family pet. According to Lester Wallman, a partner in the Manhattan law firm of Wallman, Greenberg, Gasman and McKnight, and author of Cupid, Couples & Contracts: A Guide to Living Together, Prenuptial Agreements, and Divorce (MasterMedia, $12.95), an agreement can be specifically tailored to the couple’s needs and wants. Finances are generally the main focus, but even the pettiest details can be included. “One client insisted the toilet seat be put down,” says Wallman. This example, while extreme, illustrates a point: anything and everything under the sun can go into a “prenup.” So if you feel the need to restrict your intended’s bathroom privileges, or outline a schedule for walking the dog, go ahead and have it included. Just be aware that such “extras” can be legally murky and expensive, and so should generally be considered as more psychologically reassuring than legally binding.

Although most agreements are relatively straightforward, this doesn’t mean that they are simple. The emotional cost alone could be prohibitive: 10% of people who begin to pursue a prenuptial arrangement decide against the marriage because of the strain it causes. Arguing that such relationships wouldn’t have lasted anyway doesn’t make the concept any less daunting, either. “Prenuptial agreements are very stressful,” warns Curtis Bennett Ross, a Chicago and attorney in private practice. “But they are also very legitimate, especially if one of the pair has been through in the past.” It may a foolish idea to put your relationship at risk over finances, but consider this: if the two of you are unable to sit down and talk rationally about your needs and fears when your relationship is good, then how bad might it be if things ever turn sour?

While prenuptial agreements became popular in the 1980s, there’s still a misconception that unless you’re a jet-setting celebrity dealing with millions of dollars in assets, there’s no need for such an agreement. “Anyone in any economic bracket needs to talk about money issues. There are a lot of assumptions made otherwise,” says Jacqueline Rickard, a trained family mediator and the author of Complete Premarital Contracting: Loving Communication for Today’s Couples (M. Evans and Company, $12.95).

“Middle-aged people with children from prior marriages and/or substantial assets are the most likely to be interested in prenuptial agreements,” says Jerald Kessler, a Chicago-area and mediator in private practice. “Often, they’re in their second, third, or thereafter marriage, or they have adult children who are concerned.” Often the worry is about “gold diggers” who are after money or property, especially if there is a large age gap between the couple. In such situations, a prenuptial agreement can put relatives’ minds at ease while at the same time representing the honest commitment the two have for one another.

Some people who create prenuptial agreements fall into the fabulously wealthy category, but there’s also a growing trend for young people — who may be giving up an apartment, a job, and a way of life as a result of their marriage — to get it in writing before they say their vows. “Since most short-term marriage break-ups don’t include alimony or property settlements, they’re concerned about losing everything if the marriage breaks down,” says Wallman. “In such cases, their spouse will give them a lump-sum payment so that they don’t end up at a lower economic level than when they started.” This last point overturns another standard preconception regarding prenuptial agreements: that they help the wealthy partner at the expense of the one who is less well off. Contracts can protect assets, but they can also remove the fear of financial ruin for a less-well-off spouse. Ultimately, prenuptial agreements present security for anyone who has concerns about his or her impending marriage.

Another notable aspect of prenuptial agreements concerns inheritance. Nancy Caruso Pascucci, a Chicago attorney with 20 years of experience, puts it succinctly: “You can disinherit your own children in your Will, but you cannot disinherit a spouse.” The only way that you can guarantee your future spouse will receive as much — or as little — as you wish is to spell it out in a prenuptial agreement. Without such an agreement, your wishes are unlikely to be honored if they are out of the ordinary, even if your Will expressly lays it out. Keep in mind, however, that a prenuptial agreement isn’t an opportunity for greed. In order for it to be valid, it needs to be fair and equitable (see sidebar “Will the Agreement Stand?” at the end). No contract, no matter how well prepared, will allow you to take advantage of your spouse-to-be.

So you’ve weighed all the emotional difficulties against the possible risk, and you’ve decided that you need to look into arranging a prenuptial agreement. The next obvious question: where to go from here?

“The very first thing you should do is to talk to your lawyer. I strongly recommend that this step taken even before you talk to your intended about the idea,” says Bennett Ross. “It is often the case that assets are not substantial, and it may be possible to protect those assets through other methods.” Don’t consider such an idea sneaky or deceitful: there is no way to estimate the potential hurt you could inflict on your partner by mixing love and finances. If such a painful combination can be avoided, it only makes sense to do so.

If your lawyer does recommend creating a prenuptial agreement, the next and possibly the most difficult step is to speak to your partner. It’s a daunting task, but if approached properly, it doesn’t have to be fatal to the relationship. “Prenuptial agreements, as a process, can be incredibly positive,” states Rickard. “It guarantees that each person is heard, listened to, and supported.” There might be anger or frustration along the way, but the process also offers a perfect opportunity to discuss each other’s needs, wants, and fears. Insecurity about discussing such an idea is only natural, however, and if you feel you can’t broach the topic without help, Bennett Ross suggests that you consult a therapist to help you prepare yourself emotionally for the discussion.

Once you jump the hurdle of broaching the idea, the next thing the two of you should do is to make a list of what you want to accomplish with your contract. Don’t attempt to make it sound legal; just outline what you feel is important. Consider such things as:

You might also want to discuss a date to have your property financially evaluated, and whether or not this document will have an expiry date. It might very well be that the concerns you have right now will disappear in a few years — in which case, you can set the contract up so that it will automatically modify or expire. For example, the agreement could state that a specific amount will be paid if the marriage ends within the next five years. When that time is up, the contract could stipulate a different payment amount, a new division of assets, or it could even expire — whatever you feel is necessary for your comfort. Remember that all of this is and that you will each need to sit down with your respective lawyers to hash out a legal and mutually acceptable deal. But no matter what you decide to do about your prenuptial agreement, don’t forget that it’s ultimately for your own and your future spouse’s peace of mind — and it should do nothing but good for your future together.

Will the agreement stand?

If you want your prenuptial agreement to stand up to legal scrutiny, read this section carefully before consulting your lawyer. It doesn’t mean that your spouse can’t or won’t challenge the agreement if your marriage breaks down, but your prenup has a much better chance of standing up in court if you follow these steps: