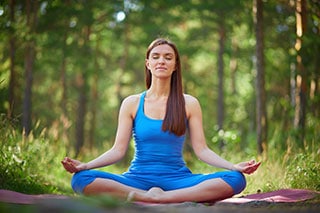 It is no wonder that divorce scores a whopping 73 out of 100 on the Holmes and Rahe Stress Scale (originally called “The Social Readjustment Rating Scale” or “SSRS”): a list of 43 stressful life events, each of which has a different “weight” for stress. The higher the score, and the larger the weight of each event, the more likely you are to get sick. In fact, divorce comes second only to the death of a spouse or child at 100 out of 100, and marital separation comes third at 65 out of 100.

Going through a divorce can present you with tough financial challenges that force you to set new life goals, as well as personal challenges which include a fear of “starting over,” worry about child custody agreements, and the effects on personal relationships with shared family and friends.

How Spirituality Can Help You Heal After Divorce

As is the case with all life-changing events, however, it is possible to find meaning even though you feel lost; spirituality has been the subject of many recent studies over the past 15 years, with findings showing that belief in God or a higher power can not only have an important role to play in our general wellbeing but also in our ability to weather life’s vicissitudes. With all the stress, worries, and fears you’re experiencing, here are some ways that spirituality can help you heal after divorce.

Spirituality and the Spectacular Now

When facing loss or change, it is easy to get stuck in the past (to get bogged down by regret, guilt, shame, or anger) or worry about the future. The focus of spirituality is on this very moment; as espoused by Eckhart Tolle, “The present moment is all you have… what could be more insane than to oppose life itself, which is now and always now?”

Being in the present moment, feeling like part of a vital energy that all human beings share, is the essence of spirituality. It enables us to escape from anxiety, stress, and worry – all of which, noted Tolle, is “caused by too much future and not enough presence.” Bitterness, anger, and an unwillingness to forgive, meanwhile, arise from “too much past.”

What does Science Have to Say about Spirituality?

Recent studies have shown that those who make time for spirituality are generally happier. Spirituality can improve your general health because those who practice it tend to have lower levels of stress and anxiety, a better mood, and an improved ability to cope with stressful situations.

One study in particular showed that taking part in religious worship was the only communal activity that promoted sustained happiness. Sharing our spirituality or religious beliefs with others, noted researchers, bestows a sense of support that can be difficult to consistently find in other settings.

More than 2,500 years ago, yoga began as a Hindu spiritual practice in India. Over the last couple of decades, yoga’s popularity has grown exponentially in the West – mainly for its exercise and stress relief benefits. If you’re one of the millions of North Americans who regularly practice yoga, we don’t have to sell you on its mind-body benefits. Researchers have been studying the effects of yoga for decades, and recent studies have measured the effects of yoga on health issues from high blood pressure to back pain to depression. So we now have scientific evidence to back up what many practitioners have been claiming for years.

Spirituality Can Help You Heal After Divorce: Which Spiritual Practice Speaks to Your Heart?

Religious worship is just one way you can express your spirituality. In a fascinating article on millennials, Harvard scholar, Casper Ter Kuile notes that in this day and age, many people are seeking spiritual experiences in different ways than their parents did. Thus, some are opting for yoga and meditation (proven in various studies to be powerful stress-busters), others are honing their ability to be “fully present” through mindful meditation, while others find the sense of community and care in intense group workouts such as CrossFit.

Spirituality has no restrictions that can tie you down. Therefore, it can appeal greatly to those undergoing divorce, grieving the loss of a loved one, or experiencing other major events, who may feel a newfound need for liberation. With science increasingly showing that it can boost happiness and a sense of communal support, spirituality can play an important role in healing mind, body, and spirit, especially when one opts for integrated activities such as yoga or Tai Chi, which focus on mind and body control.

A freelance writer and mother, Jess Walter enjoys the independence that accompanies freelance life. She also appreciates the additional time that freelancing allows her to spend with her family and her pets.