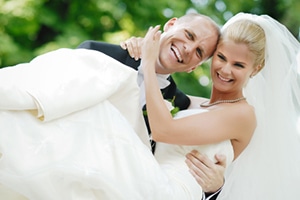 Imagine walking around with a ball and chain, or walking around carrying four (4) large suitcases at all times. This may appear to be a very dramatic description, but that is what happens to people after divorce. They carry the baggage: the pain, the suffering, their regrets and their anger around with them. That is not a good recipe for a happy second relationship and many people enter second relationships with unresolved issues from their first relationship.

In fact, many people pick the same wrong match for themselves the second time around, picking the same sort person they did the first time, when it did not work. For example, many women who have been in abusive relationships will choose abusive second partners and many men who were very unhappy about their wives lack of companionship and affection in the first relationship will choose another person who is the same way.

I always recommend that people obtain counseling when they end a relationship. This is particularly important before they begin a second relationship.

People tend to go into rebound relationships, so they are barely out of the first relationship, when to prove their own attractiveness or to fill their own need to be held, cared about and cherished they find someone new. However, there needs to be a mourning period, there really does.

I am not saying that you should not date. However, appreciating that dating is casual, as opposed to entering immediately into a hot and heavy relationship, is key. Everyone needs to find his or her balance again; it is like walking on a tightrope and doing the proper dismount. You have to get your legs back. Especially after a long marriage or even a shorter one, there needs to be time when everyone just reflects, finds their balance, thinks about what it is they want out of their lives, where they are heading and deals with the readjustments to their family relationships, particularly if there are children.

Again, I am not saying that people should not go out on a date, for coffee, or to have a good time or learn to laugh again or feel attractive in the eyes of new people. I am simply saying, that before you make any commitments to a new person for the future, there needs to be a reasonable period of time of say one (1) year.

I often tell widows and widowers not to make a major decision for over a year, and the same should hold true for the newly separated and divorced. There needs to be a time of reflection, even regret, readjustment and thought.

Not only is there a need for counseling, but there is often a need to go for counseling not only at the end of your first relationship, but as the new relationship, the second one or even the third one starts to get serious. Not only are you carrying baggage, but your new flame is also probably carrying baggage. It is a reality that both of you likely should have had personal counseling and very likely have not yet had it.

It is also true that to mesh in a second relationship is harder than in the first, because there are children, you are older and probably more entrenched in your own positions and less flexible. In addition, you each have outside pressures; whether it is dealing with an ex-spouse or how your children and family feel about the new relationship or you having someone new in your life.

You are not carefree and without responsibilities, as likely you were, when you started your first relationship.

Life is more complicated because you are older and have more responsibilities.

The reality is that family and feelings of children, parents and extended family will likely bear even more heavily on your choices now than when you were courting the first time around.

This is the reality that you and your new flame must know, as the relationship starts to become more serious. How do you both feel on many major issues. It always surprises me that people enter first marriages and/or second marriages without any discussion of the following important issues:

All of the above questions can be answered by communicating with each other, and if the relationship is becoming serious, you should be going to counseling with your new flame. Second relationships tend to move faster than first relationships, in effect, they proceed faster because people are older, want commitment, want to move on with their lives and do not feel they have the luxury of time as they did in their youth, when their relationships could mature over a lengthier period of time.

Given the above, counseling or talking things out and being forced to discuss the above types of questions; face to face with someone there to mediate is mandatory.

All too often, unfortunately, people make mistakes, often the same ones again.

On the other hand, if you attend counseling you may find out the person you are seeing is more wonderful than you thought they were. You may find that the both of you have an enormous number of ideas, beliefs in common and that there are very few points of contention, which will result in a happy, fulfilling and enriched relationship. However, you may also find out, that not all that glitters is gold, and that you are heading towards heartbreak, headache, and financial problems if you continue in a particular relationship.

Judith Holzman is a collaboratively trained family lawyer who has practiced for over 33 years in the Toronto and York Region area. She has participated in amendments to the Family Law Act (provincial) and the Divorce Act (federal) in the area of religious divorce.