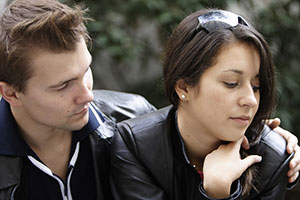 Before taking the plunge back into dating, we encourage you to give some serious thought to your priorities about relationships, about women, and about yourself. By thinking this over and recognizing some of the dating issues after divorce, you might see some clarity into what you’re looking for from here on out.

Prioritizing and Dating Issues After Divorce

What priorities should I be setting in dating?

Younger people who start dating look for commonalities: similar music, similar likes among movie stars, similar classes in high school and college, and possibly, similar occupational training. While these may be important at that age, should it take prime focus at your age? You may be looking for these commonalities already in people you meet. At all ages, the concept of similarity is one of the major ways in which we select a person we like, and therefore, eventually, a partner.

The Greeks had this idea that we are all born as twins, but we become separated from one another before birth, and we then go through life searching for the other, a “soul mate” if you will. As adults we often seek people who are like us.

For example, many of us begin relationships around music. Music, being very connected to emotion, is one strong way in which we share who we are. If a new friend has similar musical tastes, you may quickly begin to feel connected. If, on the other hand, she has very different musical interests, then you have to be more broad-minded. You might alternate listening to her music with her listening to yours.

Similarity in other areas (e.g., religion) may also be important. Some people who grow up exposed to only one religion react very strongly and negatively if asked to consider another’s religion, particularly if it is quite different. Religious groups themselves have educated their parishioners about this. They often put impediments in the way of marrying outside the group, either by preventing the marriage in the church, synagogue or holy place, or by excommunicating or otherwise sanctioning the member. Often, people who are single or single again, play the “marriage roulette” game, denying that religion (or some other belief) may be important. They may feel that choosing only from among people of similar beliefs denies them a chance at a full selection of potential mates. Later, when they see whose “number” comes up, they will deal with the issue of religion. If religion is very important to you, you may want to save yourself and the other some hurt. Decide before the emotions get too strong that this is not your cup of tea and select instead only from people within your religion. Likewise, you have to look at your similarity to the woman on other variables, behaviors, or qualities.

Let’s take the example of smoking. If you are a smoker, should you only select from women who are also smokers, and if a non-smoker, what about dating a woman who smokes? You may again do a denial trip, and say you want to keep the lines open as much as possible, but the issue of smoking or not smoking says a lot about that person. For example, smoking may indicate how anxious this person tends to be, and how she handles anxiety. Smoking may also reflect her feelings about maintaining her health and how she views her body.

Thus, her psychological sophistication, body image, and health attitudes may be signaled by her smoking behavior. Don’t interpret this to mean we are snobs, for all of us know some very sophisticated people who are smokers. However, the general trend in our society is to be much less interested in smoking with each passing year. In the United States less than 25% of the population now smokes. Furthermore, nonsmokers are less likely now to passively tolerate a smoker as they realize that passive or secondary smoke can harm non-smokers.

As a comparison you might consider how schools have dealt with smoking. Schools went from prohibiting smoking for students (and tolerating smoking among teachers, but in a special location) to “allowing” and “understanding” smokers’ needs and providing a special location for both teachers and students to smoke, to a return to the first position. In high school, we used to joke with one teacher who smelled like a chimney and often was late to class, asking him if he’d changed to cigars. But there was still the negative reaction to being near him and smelling the strong smoke odor, although he was one of the better high school teachers.

Thus, in prioritizing, you may initially think that dating a smoker is okay, and even like initial kisses, but later on you may start thinking that she will smell this way all of the time and not just at “sexy” times. You may wonder what it will be like in other health modalities. For example, if she smokes, is she less likely to take up the healthy hobby I like, and so I’ll miss out on my mountain climbing or scuba diving, or have to do them on my own?

You may have other priorities such as racial and ethnic backgrounds for finding your “soul mate.” Some of these personal attributes may overlap with your religious preferences, and it may be important for you to consider these as well. Can we suggest what is right for you? By no means. But, a little bit of reflection now can save you some time, money, and trouble later.

Sometimes, we try to fool ourselves into thinking that we have an unlimited amount of time, and thus we can just wander from one pleasant woman to another. But just like in the business world, the man with the plan will be ahead of the one who meanders from place to place. A few people will end up in satisfactory relationships without a plan, but you increase your odds with preparation.
We recommend that you consider the twenty areas listed below (in no particular order) in forming your priorities. Not all of them will be important to you, but you should pay attention to the ones that are. You may, of course, have some other priorities not listed, but we have found this to be a good starting place:

This book is for men who are in the process of going through or recovering from a divorce. Whether she moved out today, you just left the courtroom after the final hearing, or you have been divorced awhile and are already dating, this book will help you make the decisions and do the things that will make life after divorce better.
The Guys-Only guide to Getting Over Divorce and on with LIFE, SEX, and RELATIONSHIPS Authors Sam J Buser PhD & Glenn F. Sternes PhD. The Guys-Only guide to Getting Over Divorce