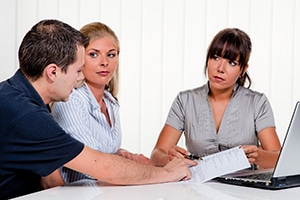 As matrimonial attorneys in difficult financial times, with evolving and varied legal issues and having to deal with nasty litigants and opposing counsel, it is always important to not cross the line between ethical and unethical behavior. Domestic relations lawyers are often a target of disciplinary complaints given the fiery emotions unveiled in these cases. The following takes a look at various lawyer disciplinary cases decided around the country recently. Many of these cases involved domestic relations but not all of them. Obviously a lot of these areas of misconduct are “no brainers” but it is interesting to see the sorts of things that are catching the eye of disciplinary commissions around the nation.

In Illinois some of the recent disciplinary decisions are found in a summary of such cases published by the Illinois Attorney Registration and Disciplinary Commission. I learned of the cases from other states courtesy of the American Bar Association Journal and the Legal Profession Blog. If the state is not identified, the discipline took place in Illinois.

I. Conflict of interest and neglect are a major problem:

It also seems when there are fee issues, that failure to pay restitution ends up hurting the lawyer in the disciplinary process.

V. Commingling and conversion is a serious problem as well:

VII. Disciplinary agencies have now begun to impose discipline for personal misconduct unrelated to the practice of law:

Also for lawyers considering this, the North Carolina State Bar may be issuing an opinion that says that it is unethical for a lawyer to offer bargains through Groupon.

Of course, the severity of some of the penalties imposed depended on whether or not this was the first offense.

The consequences of many of these lawyers’ conduct appears self-evident, but since there seem to be so many incidents of varying conduct, it never hurts to periodically make oneself aware. In domestic cases make sure your conflicts checks are accurate as that seems to be an increasing problem (in other words, both spouses interviewing with the same lawyer or firm). Neglect is another problem area. If you are too busy to properly deal with a difficult family law case, refer it to someone who has the time or bring them in as co-counsel. And since these cases also touch on other areas of the law such as bankruptcy, corporate law, and real estate, make sure you are equipped with the knowledge to handle the case. And beware of clients who lie and understand the ethical rules in your state concerning what to do.