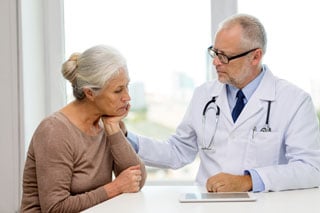 UPDATE: This study was retracted in July 2015.

Although most wedding vows include a promise to support each other in sickness and in health, a new study has found that serious health problems can lead to a higher chance of divorce among couples over 50. In particular, researchers found a stronger link between a wife’s illness and a couple’s overall odds of divorce.

Aptly titled “In Sickness and in Health? Physical Illness as a Risk Factor for Marital Dissolution in Later Life” and published in the Journal of Health and Social Behavior, the study was recently conducted by researchers at Iowa State University. They examined data collected from 2,701 couples over the age of 50 between 1992 and 2010 with the goal of determining whether serious illness could influence marital stability. The study did find a link between illness and divorce, but the results were notably different depending on the gender of the spouse who became sick.

Researchers found that if the wife suffers a stroke or is diagnosed with cancer, lung disease, or heart problems, the marriage has a 6% higher likelihood of divorce. On the other hand, a couple’s odds of divorce are unaffected if the husband is diagnosed with a serious medical problem.

“This has gotten a lot of pretty strong personal reactions from individuals that I’ve talked to,” said Amelia Karraker, lead study author and assistant professor of human development and family studies at Iowa State University. “People have said, ‘This happened to my friend’ or ‘This happened to me – I got breast cancer and then my husband asked for a divorce.'”

While the study’s findings are indeed shocking and more than a little bit disheartening, we can take solace in the fact that they don’t present a complete picture. For instance, the study does not identify the reasons behind why more couples get divorced if the wife becomes seriously ill and did not determine which spouse was more likely to initiate the divorce action in these situations. Additionally, previous studies have shown that women are responsible for two-thirds of divorce filings – which could suggest that husbands are not abandoning their sick wives en masse.

“You could also think of a major illness diagnosis as a turning point for some people,” Karraker said. “It may be that some of these women say, ‘I don’t think this is a good marriage; I’m not happy; I want to do something different,’ and this is just the impetus to do that.”