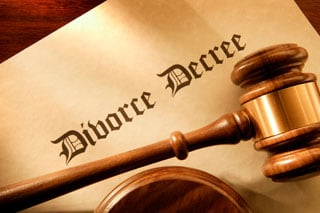 Detectives quickly focused on Mary Colletta’s husband after they noticed a bundle of blood-spattered divorce papers next to her body on the top deck of a hospital parking garage.

According to opening statements in his murder trial, Christopher Colletta, repeatedly told his friends he could not bear the thought of his wife divorcing him.

He allegedly said, “I’m going to kill her because I can’t live without her.” He is charged with first-degree murder and armed criminal action.

Officials said, Colletta sat in his car on the top deck of the garage at St. John’s Mercy Medical Center in Creve Coeur, now known as Mercy Hospital, on August 3, 2010.

Surveillance video shows him waiting about an hour for his wife to approach her car, although it doesn’t show the murder.

According to testimony, he took 62 seconds to leave his vehicle, stab her at least 18 times, return and drive away.

Colletta hid the murder weapon inside the divorce papers as he approached her, said Prosecutor Stephen O’Brien.

Defense lawyer Robert Taaffe asked the jury to consider whether his actions reflected the cool and deliberate elements needed for a first-degree murder conviction. He did not dispute that his client was the killer.

Mary Colletta worked as a CT scan technologist at the hospital. The couple had separatedand that she had obtained a restraining order against him the month before, according to detectives.

O’Brien said the divorce papers found next to the body were signed by Mary Colletta but not by Christopher Colletta.