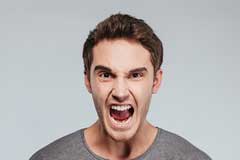 Rose was so mad she could hardly see straight. She and her husband, Jim, were six months into their “trial separation” when she discovered that he had been dating someone else. Reeling from the impact of the painful news, she sped over to his new apartment, intent on learning every last detail about the new woman in his life. Her heart pounded and terrifying questions flashed through her mind as she drove: “How could he have lied to me? Who was this other woman? Was she attractive?” And, perhaps worst of all, “What was I thinking when I suggested that we should separate?”

At Jim’s apartment, a deep and uncontrollable rage rose up inside Rose’s chest as she pounded her fist again and again on the dining-room table. “How could you do this to me?” she cried, as Jim sat and watched, white-faced and speechless as the breakfast dishes flew off the table and smashed into pieces on the floor. He had no idea how to react — or how to begin to defuse the scene that was unfolding in front of him…

Anger is a very familiar emotion for all of us. And in healthy relationships, it can be an overwhelmingly positive force in our lives. “Anger is a very healthy emotion,” says Chet Mirman, Ph.D., a licensed clinical psychologist and director of The Center for Divorce Recovery. “Healthy anger can tell us if there’s something wrong — something painful and threatening that we need to take care of. It helps us protect ourselves, and to know when people are crossing our boundaries.”

But for couples who are going through separation or divorce, anger is often anything but healthy. In her informative book The Good Divorce (Harper Perennial, 1995), Dr. Constance Ahrons defines divorce-related anger as “an extreme rage, vindictiveness, and over-powering bitterness that is felt when a love relationship is ending. It is a special kind of anger that usually hasn’t been experienced before.”

When anger is coupled with divorce, it’s often used as a misguided means of hanging on to a failed marriage. After all, for many people, a bad relationship is better than no relationship at all. Divorce anger allows people to punish their ex as often as possible, all while maintaining an ongoing (bitter) relationship with him/her. It’s a situation that leaves both partners in divorce limbo — a perilous situation that obstructs growth and self-awareness.

Some people hold onto their anger so tightly — stoking the fires on a daily basis — that their rage takes over their whole lives, coloring and informing all their thoughts and actions. They weigh every action to see how much emotional or physical harm it will inflict on their ex-spouse — even simply being a nuisance will do in a pinch — without seeing the injuries they may be inflicting on innocent victims.

When Peter announced he was getting married, his ex-wife Jeannie hit the roof. “He has this great new life — a nice house, good job, pretty wife — and I’m stuck with nothing,” she complains. “So whenever I have the opportunity to spoil something for him, I take it. Sometimes, I’m a little ashamed later, but it feels great at the time.” At the last minute, Jeannie refused to let their two children participate in Peter’s wedding ceremony. Instead, she dropped them off just as he and his new wife Sara were leaving for their honeymoon. The kids were so upset about missing the wedding and being dropped off without warning that Peter felt he had to cancel the trip — which in turn upset Sara.

Using the court as a venue to vent your anger is a bad idea for a couple of key reasons: it’s the wrong venue, and it’s very expensive (financially and emotionally). Unfortunately, the legal divorce process itself tends to add fuel to the fires of anger. Dividing property (some of which has great sentimental value) and trying to prove your case for custody and/or support can be very emotionally charged because these issues underline what is being lost or changed because of your divorce. Some degree of upset is inevitable, but driving yourself alongside your ex into bankruptcy is truly cutting off your nose to spite your face.

So how can you cope with this new and intense anger? The key lies in understanding its roots, and in finding constructive ways to express the hurt, disappointment, and loss that both you and your former spouse are feeling now as you proceed through separation and divorce. “Anger can really be a very healthy and positive tool, but if we use it destructively, all we do is scare people and alienate them,” stresses Dr. Andrea Brandt, Ph.D. M.F.C.C., and a specialist in anger management with the California-based LifeWorks Company. “People have to learn to have anger work for them, not against them.”

Here’s some advice about coping with your own and your ex-spouse’s divorce-related anger.

If your ex is angry: