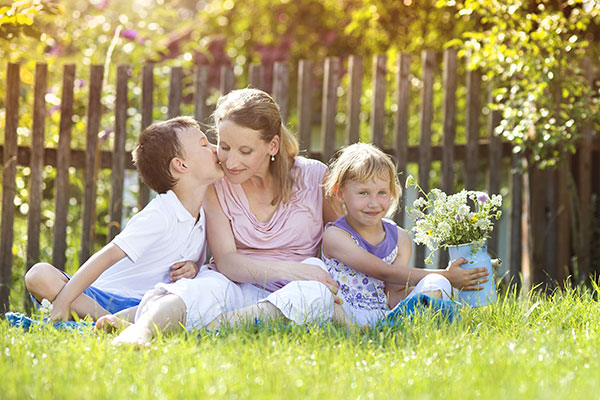 Maria (not her real name) has three daughters and is raising them independently since she filed for divorce. She took two jobs to cover the necessities and a few luxuries for them; luckily, her mother and siblings offer her help from time to time. Oftentimes, however, she faces the challenges of being a single parent on her own.

Maria is among the 11.6 million single parents recorded by the US Census Bureau, 80% of the total figure is single mothers.

Single mothers face various challenges daily – from raising the kids on her own, helping her children cope with the separation from the other parent, to coping with work-related stress. Based on studies, half of women and one-third of men hold anger against their former spouses. In 2004, a separate study also found that one-third of women and one-fourth of men looked at their lives as unfair and disappointing.

When stress is too overwhelming, and no family help is in sight, mothers could face more difficult problems like depression and drugs. In 2014, a survey showed that almost three in 10 separated and divorced men and women reported using drugs or medicine to relax. The figure is higher compared to married men and women, 17% of whom admitted taking drugs or medications.

Effects of Divorce on Children

Each child has his or her own strengths, weaknesses and personalities, mainly due to their different degrees of social, emotional, and economic resources. Research shows that while children of divorced parents have different responses and effects, their losses should be acknowledged. Here are five effects divorce might have on children:

1. Losing Time with One or Both Parents

Children of divorce do best when they have equal access to both parents. However, this doesn’t always happen after a divorce. Spending more time with their custodial parent could partially compensate for the time they are missing with the other parent. However, when the father effectively disappears from the family, children of single mothers may also spend less time with her since she may need to work long hours to support the family on her own.

In 2014, a report showed that children with single mothers are prone to living in poverty compared to children living with both parents. A study shows that single mothers who take custody of their children lose 25 to 50% of their income before the divorce. In 2011, the US Census Bureau also found that 23% of women who got divorced in the past year receive more public assistance than 15% of men. Data showed that custodial fathers experience financial loss, too, but they tend to recover fairly quickly.

Because of separation, children are prone to have a weakened relationship with a parent. In 1996, a study showed that fewer than half of children living with their mothers who got divorced were able to see their father at all for more than a year. Separation also causes the children’s weakened relationship with grandparents and relatives from their non-custodial parent. Children are prone to losing family traditions, friends, and other support networks because of their change in residency.

Studies found that anxiety among children seems to worsen after a divorce. Children may also have lower scores on self-concept and may display poor practice in social relations. A study in Sweden also found that children growing up with a single parent are more than twice likely to have a serious psychiatric disorder, develop alcohol dependence or commit or attempt suicide. Studies also showed that children living with only a single parent are twice as likely to suffer from emotional and behavioral problems.

5. Poor In Cognitive Stimulation and Health

The Family Structure and Children’s Health in the United States found out that children in nuclear families were less likely to have a learning disability or attention deficit disorder regardless of their family’s educational background, income or area of residence compared with children in other families. Children whose parents are divorced were also found to have less language stimulation and were prone to have lower grades. In 2012, the National Center for Health Statistics National Health Interview Survey showed that only 12% of children in nuclear families were considered to be poor in health compared with children of single parents (22%).

What Single Mothers Could Teach Their Kids About Relationships

The first piece of advice is to teach positive lessons only! Telling your children that all men are deceitful and untrustworthy is only helpful if you want your children to grow up unable to commit to or be intimate with a potential partner. Don’t sabotage your children’s future relationships before they’re even old enough to have one!

A study in Europe found suggests that parents who keep open communication with their children greatly influence their kids’ decisions in life. Mothers can encourage understanding and empathy among their teenagers to help them become better parents and better partners someday.

Rember that what you do is just as or even more important as what you say, so make sure to model the lessons you wish to teach.

Here are three things single mothers could teach their sons:

Here are three things single mothers could teach their daughters:

If you need help coping with or recovering from divorce, finding a local support group or online community of single mothers and/or divorced women can be a game-changer. Other single mothers who have been in your shoes can often offer helpful advice based on their own past mistakes and accomplishments. If you are suffering from addiction issues, ask your family doctor about women only rehab centers.  Getting the help and support you need can be a starting point to reinventing yourself and living a happier, healthier life after divorce.

Dale Vernor has a background in journalism and an English degree from Central Michigan University.