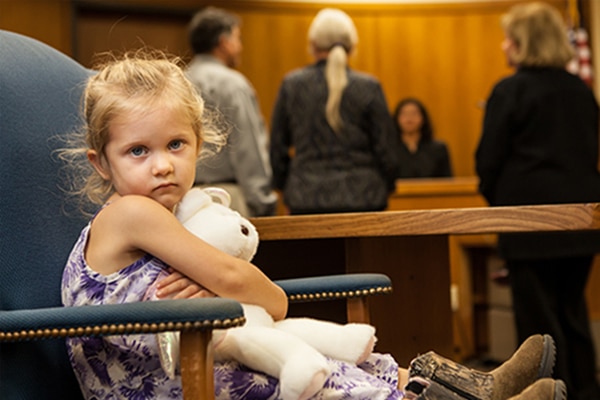 It is doubtful that there is a parent out there who would desire to involve his/her children in a divorce proceeding unless it was absolutely necessary. Yet, I don’t need to tell you that child witnesses are an unfortunate aspect of the process no matter what our intentions are. Because the legal conclusions based upon what children say is of such material importance, the state of Nevada has recently enacted new rules (effective 1 March 2019) that regulate how a judge is to take such important testimony from a child witness, and how certain exceptions to the testimony process might be taken into consideration to protect a child witness during divorce in Nevada.

For the sake of clarity, I thought it would be best to elucidate these codifications through an example:

Jim and Pam were married for 10 years and had two beautiful children. Unfortunately, the relationship did not work out and the couple finalized their divorce last year. The settlement includes a custody schedule in which the parents share responsibility for their children. Now each person is dating anew, but an issue has arisen: the children are accusing Pam’s new boyfriend of threatening behavior.

Upon hearing this from his children, Jim (through his attorney) filed a motion with the court to reconsider Pam’s custody rights. Pam vehemently denies the accusations against her boyfriend through her counsel. The judge overseeing the matter had trouble controlling unpermitted outbursts during the divorce trial, and he is concerned if the children will feel safe enough to be truthful. In turn, the judge decided to interview the children in his chambers with only the clerk present. The judge subsequently found the children credible and ordered to decrease Pam’s custodial time to ten weekends a year.

How are Child Witnesses Protected During Divorce in Nevada?

A judge has broad authority when it comes to child witness testimony —but he must show his work.

Stop and consider for a moment how difficult it would be to draft a law that would account for all the possible contingencies when it comes to child witness testimony scenarios. It is almost impossible. Subsequently, the law has entrusted our judges with the power to determine the steps to take in these types of situations — particularly when trying to protect a child witness during divorce in Nevada.

Such determinations are done through a two-step process. First, the judge must consider the provisions of NRS 50.580, which state that a judge “may allow a child witness to testify by an alternative method” if the finder of fact finds that by a “preponderance of the evidence,” such an alternative method is in the “best interests of the child.” The law then lists five factors that a judge “shall” consider:

(a) The nature of the proceeding;

(b) The age and maturity of the child;

(c) The relationship of the child to the parties in the proceeding;

(d) The nature and degree of emotional trauma that the child may suffer in testifying; and

(e) Any other relevant factor.

Again, you can see why judges are granted so much authority to protect a child witness during divorce in Nevada: no two children are the same, especially at one given time. So before obtaining testimony from Jim and Pam’s children, the judge will evaluate on a 50/50 scale (“preponderance of the evidence”) if the alternative method is appropriate.

Yet, as of 1 March 2019, Nevada judges must consider the possible alternative methods of testimony listed in Nevada Rule of Civil Procedure 16.215(d)(1) which include:

That’s not all. Rule 16.215(d)(2) lists four additional factors that a judge “should consider” to balance the rights of the parties, including the location of where the testimony is taken, who is present during the testimony, who is permitted to question the child witness, and if it is possible to record or simulcast the sessions so all parties may see what was said.

Although Powerful, a Judge May Not Neglect Due Process Considerations

Finally, we are ready to look at our example. We will presume that the judge assigned to Jim and Pam’s matter only intends to find the truth about what occurred with Pam’s boyfriend, however, he went beyond his purview in at least two regards.

First, from a simple reading of NRS 50.580 and Rule 16.215, it is clear that the legislature intends for defendants like Pam to have her constitutional rights (due process in this instance) protected — child custody is so significant of a right to be altered that a judge must offer Pam a right to object. In our example, even if the judge thought that having Pam’s lawyer question the children would not be in their interests, at least Pam should be permitted to submit questions to be asked by a third party.

Further, recall that the judge did not record the session and altered the custody schedule as he saw fit. Pam’s due process rights at least require the court to provide her counsel with a transcript — better yet, a video recording — so that Pam can see why the judge concluded what he did.

Although the judge must always prioritize the best interests of the child when evaluating alternative child witness scenarios, s/he must also abide by the minimum requirements of the constitution.