The Jeff Bezos divorce case is turning heads all around the globe. Just yesterday, the Amazon CEO announced that after 25 years of marriage, he and his novelist wife MacKenzie have decided to divorce. The couple appears to be on a path to an amicable divorce judging by the joint statement published on his Twitter page: “We have decided to divorce and continue our shared lives as friends. If we had known we would separate after 25 years, we would do it all again.” If they do follow through with what they said in their tweet, this would certainly be an example of a “good” divorce.

[Pictured here: Jeff and MacKenzie Bezos on the Red Carpet of the 2018 Vanity Fair Oscar Party.]

What We Know So Far About the Jeff Bezos Divorce

According to Forbes, Jeff Bezos, the richest person in the world, is worth a whopping $136.2 billion. It is not yet clear what effect the divorce will have on his net worth or stake in Amazon. In the event that a prenuptial agreement was not signed prior to the marriage, the split could potentially be the most expensive divorce in history.

The couple’s primary residence is in Washington state, which is a community property state. This means that any wealth made during the duration of the marriage could be split between the two, resulting in the largest paycheck in divorce history for MacKenzie Bezos.

The couple married in 1993. MacKenzie worked as an accountant for Amazon in its first year after the couple started the company in 1994, and she was one of Amazon’s first employees. Assuming the couple agrees or a court rules that some – or all – of Bezos’s shares are community property, MacKenzie could be entitled to up to half of the Bezos fortune: a staggering $66 billion.

What Does This Mean For the Future of Amazon?

According to Christopher D. Pitts, a Seattle, Washington, family lawyer who focuses on financial complexities in divorce and has worked extensively with executives in the technology industry, the Bezos divorce might be less complicated than you might think. “My understanding is that Amazon was started after the couple married and is, therefore, community property under Washington law. Accordingly, Ms. Bezos will get half of their net worth or about $68 billion.” Because Amazon is publicly traded, Pitts believes that there shouldn’t be any real argument about its value. “With that kind of property award, I seriously doubt there will be any arguments over child support,” he says. “And with $68 billion in property awarded to her, I doubt Ms. Bezos would be awarded any spousal support.” 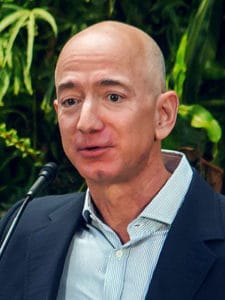 “My understanding is that Bezos owns 16% of outstanding Amazon stock. That, in conjunction with his status as founder and CEO, likely makes him a controlling shareholder, so there could be some argument over a control premium to be applied to the value of his shares. In addition, there could be some concern about Ms. Bezos selling most of her shares in order to have a more diverse investment portfolio for herself after the divorce,” Pitts says.

If MacKenzie is indeed entitled to half of Bezos’s shares, it is not clear whether she will retain them or whether she will want to sell her shares. Despite being the richest person in the world, Jeff might be hard-pressed to come up with the billions needed to purchase MacKenzie’s shares. One way or the other, it seems likely that he will have to let go of some stock, which could diminish his ownership and stake in the company.

Pitts adds that having such a large amount of Amazon stock dumped all at once could be problematic. “It’s not clear how investors or the Amazon Board would react to having a brand new investor with a 7% interest in the company overnight. These aren’t community property or marital dissolution issues per se, but they’re certainly issues that will need to be addressed,” he says.

How Do High-Net-Worth Divorces Differ from “Regular” Divorces?

Aside from the millions (or in this case, billions) of dollars that separate a high-net-worth from a middle-class divorce, high-net-worth divorce cases typically have much more complex finances and complicated assets to value and distribute. These cases can involve many different financial experts – from forensic accountants to business valuators – who can trace and value assets. And if each spouse hires their own financial experts, and those experts fail to agree, this can lead to prolonged litigation.

On the other hand, in some cases, high-net-worth divorces can sometimes be easier if there is enough money to allow both parties to continue living their pre-divorce lifestyles. However, it is also true that some divorcing spouses will never be satisfied with their settlement: whether that is $5,000 or $5 billion.

What Happens If There Is No Prenuptial Agreement?

Recent reports state that the Jeff and MacKenzie Bezos did not sign a prenuptial agreement prior to the marriage. This would not entirely come as a surprise, considering the couple wed before Amazon’s multi-billion dollar success. If there is no prenuptial agreement to reduce her community stake in Amazon, MacKenzie could potentially turn into the world’s richest woman.

It is not yet known how the Jeff Bezos divorce case will unfold, but one thing is certain: the outcome of this divorce is likely to be the most expensive divorce settlement in history.