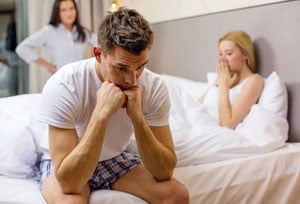 Infidelity has been studied for decades by experts in psychology, sociology, and neuroscience fields. It is of interest to every race, religion, and culture because it doesn’t discriminate. Soap operas and tabloids make money from exposing cheating spouses. Local pharmacies sell paternity kits. Needless to say it is a pandemic that affects everyone.

Dr. Laura Schlessinger is a radio personality who has been widely criticized for taking the unpopular stance of holding women responsible for their cheating husbands. Dr. Laura once said, “When the wife does not focus on the needs and the feelings – sexually and personally – to make him feel like a man, to make him feel like a success, to make him feel like her hero, he’s very susceptible to the charm of some other woman making him feel what he needs.” Dr. Laura brings up a good point from the perspective of, if a woman feels her marriage is losing ground or is showing signs of wear, she has a choice – either ignore it and hope it gets better or bring it to her partner’s attention and start working on the relationship.

Marriage is a full-time job that needs constant attention and nurturing. Many couples make the mistake of putting children, careers, etc. first, taking their marriage/partner for granted. Women should be aware of the state of their marriage and can take some accountability for their husband’s actions. However, one big determining factor for a man cheating is having it as an option. If a man puts blinders on when he commits to a woman, he will not be aware of the temptations around him.

With recent high-profile infidelity being in the news, this has become a hot topic. Louann Brizendine, author of The Female Brain, suggests, similar to homosexuality vs. heterosexuality, that whether someone is monogamous or promiscuous is decided in the womb – it’s not necessarily learned behavior or an inherited trait. Men and women are either cheaters or loyal from birth. (It’s more frequent in men only because they have much higher levels of testosterone and think about sex much more than women do, so they tend to find more opportunity). So are the factors that contribute to promiscuity in men from birth also related to thirst for power?

Research from Joris Lammers, an assistant professor of psychology at Tilburg University in the Netherlands, published in Psychological Science states: “The likelihood [of infidelity] increases the more powerful someone is.” The study analyzed the results of an Internet survey of 1,561 readers of a Dutch business magazine. Power leads to this disinhibited sense that you can get what you want and should take risks to get it. In the same line of thinking, Chris Rock says that a man is basically as faithful as his options allow.

Although the idea of selling infidelity tests right along with paternity tests sounds wonderful, it might not be realistic just yet. My advice to women is to get to know your partner very well and don’t ignore red flags. Make your marriage a priority by investing time and energy into being a lover, friend, and companion to your husband who you voluntarily chose and committed to. Plan date nights, compliment him, support his ideas, and praise him to your friends. Invest in him as much if not more than your children. You will reap the benefits of your actions as well as your children.