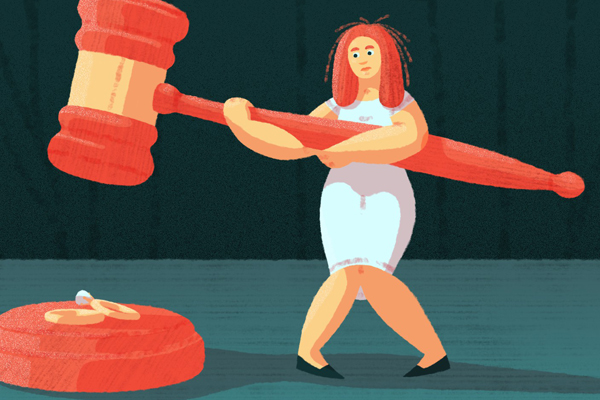 A number that has been growing for the last 70 years is the discrepancy between genders for filing for divorce.

According to “Who Wants the Breakup? Gender and Breakup in Heterosexual Couples” (2015, updated in 2017) by Michael J. Rosenfeld, Ph.D. – a professor and social demographer at Stanford University – women are more likely to file for divorce than men in almost 70% of cases. According to the National Center for Health Statistics, the number is more like 80%.

One would think that women, who are generally portrayed as being the heart of the family, would be more reluctant to formally break up a marriage than men. Obviously, that’s not the case.

As a divorce lawyer for many years, I have some insights into why women are more likely to file for divorce than men.  These opinions are based on my observations from over 25 years as a practicing divorce lawyer.

The observations of another family lawyer with a different practice in a different town and state may contradict my own – and, of course, your experience may be the opposite of the six reasons I’ve provided (below). As with any generalization, there will be people who fit these patterns to a T, and others who don’t fit them at all.

However, awareness of an issue is the first step to resolving it, so I hope this article provides some food for thought – no matter whether you identify with the female or male experiences described below.

1. Most women no longer dream of being housewives; they want satisfying careers and marriages.

Since World War II, women are increasingly less satisfied with the institution of marriage and the stereotypes associated with them. In the 1950s, Madison Avenue portrayed wives vacuuming or doing other household chores in cocktail dresses and high heels; women were expected to be housewives, the primary caregiver for the children, and still look fantastic (and have dinner ready to serve) when they men arrived home from work.

When wives had to become working women while their husbands were overseas during World War II, they found they liked earning money and having lives outside their homes, and they were reluctant to return to being “just a housewife”. One needs only look to the 1960s and 1970s and the odyssey of the feminist movement to understand that women, like Baby, will not be put in the corner.

Decades after the Women’s Liberation movement, women still feel oppressed, marginalized, and undervalued – and as the recent Women’s Marches have shown, they are no longer willing to put up with the status quo.

2. Women look forward to true equality of the sexes, men look backward to the “Golden Age” of marriage.

Men generally try to find and marry the woman of their dreams – and then expect that she’ll never change from the day they got married. Men are comfortable in their roles as the “head of the house” while women are not particularly satisfied with being pigeon-holed as a wife who supports her husband’s career, the primary caregiver to their children, and the unpaid domestic help.

Women, on the other hand, look at their partner’s potential. Women are more willing to marry someone who doesn’t check all of their boxes hoping that they can guide their men into perfection. Women become frustrated with men who resist change. Society, religion, and other cultural “norms” have oppressed women around the world for thousands of years, and women are becoming less and less inclined to go along with these regimes.

3. Women are less willing to accept unhappy relationships than men.

Generations of men have been trained to “man up” and stay in unhappy relationships – and perhaps to seek happiness outside their marriages to make their lives tolerable. Modern women, however, are more independent than most men think, and they’re unwilling to accept unhappy relationships month after month, year after year, with no hope of change.

Oftentimes men don’t even realize that they are in a failing relationship until their wives say “I want a divorce!” I have often heard male divorce clients state, “I thought everything was fine – I was blindsided by this divorce!

In business, “successful” men are trained to focus on intellectual pursuits, to use logic to solve all their problems and to ignore their emotions. Ironically, it is this disconnect that often causes a marriage to fail – and for men think their marriage is “fine” while their wives are talking to divorce lawyers. By the time the divorce is filed, women are done trying to work on the relationship.

4. Men often believe they have more to lose in a divorce than women.

Many men hold the misconception that they will do poorly in court – the cards are stacked against them in terms of finances and child custody. Many men’s divorce groups are perpetuating this idea: taking one man’s terrible experience and making it seem like all men are treated badly in court.

The stereotypes of men as breadwinners and women as caregivers have changed, but men still believe that they have more to lose than women in a divorce. For that reason alone, men are reluctant to “go there.”

5. Women are quicker to consult a lawyer than men.

Quite frankly, there is an advantage to be the plaintiff in court, in the sense that you get to go first and argue last. I would much rather represent a plaintiff than a defendant. While there are often “races to the courthouse”, most women are quicker to consult a lawyer than men and are empowered to pull the plug.

6. Women are much more aware of the emotional health of their marriages than men.

If the marriage is a “traditional” one – with a stay-at-home mom and a breadwinner dad – women are going to pick up on any problems with the marriage and the children before a man would. Women notice that their husbands regularly go out for drinks after wor with their co-workers, or spend evenings and weekends entertaining clients for dinner or a round of golf.

Meanwhile, they may not have spent any quality time together as a couple – without the children – (think “date night”) in months or even years. If they are concerned for the wellbeing of their children, their maternal instincts will often take action quicker than those of their male counterparts.

Men are usually more comfortable with the status quo than women, and women are more observant of red flags than men – so men are often shocked and surprised when their wives file for divorce.