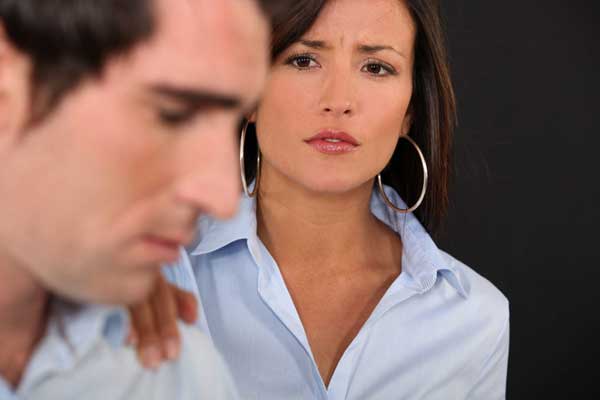 Telling your mate you want a separation or divorce is a moment of truth, and every individual I interviewed remembers precise details about this instant. In my case, we were vacationing in Lake Tahoe when I told my husband.

We sat looking at the clear blue water, at our kayak tied to the dock, and ducks bobbing on the surface. And then I broke the stillness by saying, “I think we should separate for a while and see what happens. I need space to find out who I am and what I want. I need to leave when we get back home.” I said a few other things, to make it sound less final, less threatening, and less hurtful. As I spoke, I felt strong and exhilarated to finally break the news to my husband. I felt terrified as well.

Candace, now divorced for seven years, says of her leaving speech: “I felt mixed emotions when I said to Lenny, ‘I’m leaving and taking the children with me,’ because I still loved him; I still love him to this day. But for three years I tried to get him to come to therapy with me. I tried to get him into rehab for his addictions, but he would not go. He wouldn’t look at his part. I feel I did everything to try to make my marriage work.

Finally, I had to get out of there. Right before I left I had a dream or vision that said I was going to die if I did not leave. I left to save my life in a way.” Ironically, Candace is now a therapist who works with

people with addictions. As a therapist, her advice to those who are preparing to leave a marriage is, “Be honest. Tell the truth as long as you are safe to do so. Say: ‘I’m leaving. This is what I need to do for me. I think it is the best thing for both of us at this time.'”

Depending on whether you are preparing to leave, wanting a trial separation, or you have made the decision to divorce, your choice dictates the degree of finality in your words. The following scripts make this progression clear:

1. How to Break the News if You’re Preparing to Leave

In an ideal situation, both parties are open and agreeable, very adult and willing to listen calmly. In a more realistic scene, one spouse is dissatisfied and the other thinks things are fine – or is less invested in changing the status quo. It can be scary to tell your husband or wife that you have been thinking about leaving. This is why it’s good to write in your journal, talk with someone, and do some planning, before communicating with your partner.

“I’ve been thinking a great deal about our relationship and I think it might be best to separate for a while. I don’t have any timeline in mind, but I’d like to talk about it.”

“Our relationship doesn’t seem to be improving. We’ve tried a lot of things, we have been talking more, and I’m not sure it’s better. What do you think about a separation?”

2. How to Break the News if You Want a Trial Separation

“I need some time and space to sort out my feelings about our relationship. I can’t seem to get this perspective while we’re living together. I just feel more confused. Maybe if we live separately for a while, we can get centered, continue to go to therapy, and be able to sort things out.”

“For now, I think the best thing is to separate. It’s just not working while we live together. Maybe some time apart will help each of us sort out our feelings and what we want.”

“Living together right now is just not working. We don’t seem to have the perspective or ability to understand the problem or each other. It might be best if we live separately right now.”

How you say this depends on the desired outcome. Do you want the separation in order to eventually reconcile, or is the separation a stepping stone to divorce? You may not know the answer at this point. Some couples begin a separation in order to gain useful tools to negotiate a reconciliation. Others buy time with a trial separation because it’s too hard emotionally or financially to file for divorce immediately. They are taking the first step towards dissolution. You just need to take one step at a time, consciously choosing from a place of inner truth.

“I want a divorce.” Millions of people have used this phrase: some at the height of an argument, others after months or even years of working on the marriage.

3. How to Break the News if You’re Asking/Being Asked for a Divorce

If your spouse is asking for a divorce, and the two of you have not discussed your issues, have not talked with a marriage counselor, or haven’t tried some of the other options – such as an in-house separation – then suggest to your spouse that it is premature. If your spouse will not negotiate and insists on leaving and filing for divorce, there may not be much you can do to change his or her mind.

Jessie, who is currently separated from her husband Mel after four years of marriage, is in this situation. Mel would not return her calls, and when she finally reached him, he said, “I don’t want to be with you. I want a divorce.”

On the other hand, if you are the one who wants a divorce, and you are certain that this is what you need to do, then you can say something like: “We have exhausted every option. We have tried everything to make this marriage work, but I don’t see any other choice but to divorce.”

As a free individual, you have the option to do whatever you want. You don’t have to be conscious. You don’t have to explore all options. You can just say you want a divorce. My belief, however, is that as human beings we have a higher consciousness; we have choices, and every action has a corresponding reaction. If we want “right relations” with others, then we need to think carefully about our choices and strive to harm no one in the process. I believe we should attempt to be conscious every moment, for the choices we make in the present will affect our lives in the future.

Part of my reason for writing about “right relations” is that I didn’t always behave responsibly during my divorce, and it has taken a few years to make up for my behavior. After trying to make amends to my former husband several times, and showing kindness to him in words and deeds, our relationship is once again based on trust and friendship. But to be honest, while leaving my marriage, I often deliberately hurt his feelings. I was not tactful when telling him I was leaving, I was greedy about what I wanted from the house, and I left him with the responsibility for our son and the upkeep of our large home. In other words, I behaved selfishly. This doesn’t mean I should have taken full responsibility for our marital problems, nor that I should have stayed in the marriage. How he treated me – especially his absence and neglect – in part, caused me to be cruel out of anger and retaliation. However, I wish I could have been more aware of the effect of my actions and words on everyone. Hopefully, you can learn from these mistakes.

This article was excerpted and edited with permission from the book Conscious Divorce: Ending a Marriage with Integrity (Three Rivers Press, 2001) by Susan Allison, Ph.D. With a Ph.D. in Transpersonal Psychology, Dr. Susan has a private practice with individuals and groups to bring about healing using traditional therapies, hypnosis, process therapy, shamanic journey, and energy medicine. Learn more at www.drsusanallison.com.