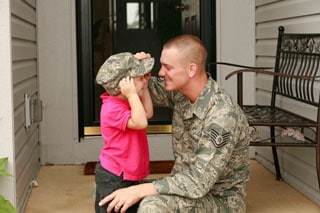 Most of our states have now adopted laws that deal with timesharing when a military member is deployed. In Florida and in Georgia – and I’m sure there are other states that have also done this – there is a special statute that says that if a military member is deployed, then their family is allowed to exercise their timesharing with the child during that deployment. What that means is, let’s say that you are deployed to Afghanistan; your mother can come to wherever your spouse is residing and visit with your child during the time you are deployed. Let’s say you have the child every other week. If your mom wants to move to Florida and have your children during the weeks when you would’ve had your children if you hadn’t been deployed, then she can do that. You can designate a person for that.

I would always talk to an attorney about it because every state is a little bit different and you want to make sure that you specifically state that in your agreement, but there are laws that do allow for that. There are ways, and you can also put in provisions for Skype and FaceTime. Most of my military folks, that’s what they used to communicate with their kids, and it’s a lot easier when you’re seeing faces on the other side. You can put in provisions that require the spouse or the former spouse to make sure the children get in front of the camera and make sure that they call at a certain time, especially if the time zones are weird. You want to make sure you have that kind of information put into your settlement agreement so that they will be held to having to do that. Hopefully, they would do that anyway, but you never take anything for granted in a divorce. You want to make sure you get all the information in that settlement agreement. You want to talk to an attorney about that specific language and just make sure that that’s in there.