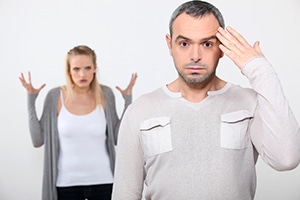 A Family’s Heartbreak: A Parent’s Introduction to Parental Alienation, follows the story of Mike Jeffries and his family — wife Beth and sons Jared and Adam — as Mike realizes his post-divorce dream of co-parenting his children as they split their time between two households will bear little resemblance to a post-divorce reality consumed with trying to maintain a normal relationship with his 11-year old son Adam in the face of parental alienation.

THE NIGHT STARTED OUT POSITIVE enough. Adam came into my room to talk to me. Ever the optimist, I took that as a good sign. But within minutes Adam became rude. Then he decided to leave. I told him to sit down. I wasn’t done talking.

Adam didn’t sit down, so I got up and blocked the door. Adam screamed for Beth. He said that I wouldn’t let him leave the room. Then he started hitting me. I went into my 44 year old imitation of Muhammad Ali’s rope-a-dope. I had this fantasy that if I let Adam hit me long enough he would work out his anger and frustration, collapse in tears into my arms, and the healing would begin. Let’s just say the rope-a-dope worked better for Ali against George Foreman than it did for me. There was no rope and I was the dope.

Beth called the police when I wouldn’t unlock the door or let Adam out of the room. She told them I physically assaulted Adam. When the police arrived they separated everyone and talked to each of us individually. Luckily, Adam told the police the truth — I never laid a hand him.

The cop said I was within my rights to keep Adam in the room with me — maybe not the best way to handle the situation but certainly not against the law. The official police report stated, “Verbal only. No violence. All okay at this time.” Only a police officer used to seeing much worse would characterize my situation as “all okay at this time,” but I wasn’t about to argue.

I shared this experience with Dr. Davies during my next visit.