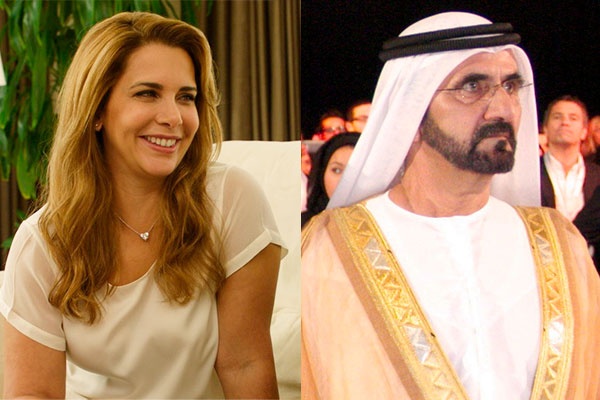 Dubai’s billionaire ruler, Sheikh Mohammed bin Rashid Al Maktoum, is taking his wife, Princess Haya bint Al Hussein, to London High Court after reports began to surface that the Princess left him and fled to London with her children in fear for her life. Sources say that the Princess’s unusual move was spurred by the Sheikh’s abusive behavior after she discovered disturbing details regarding last year’s disappearance of his daughter, Sheikha Latifa bint Mohammed Al Maktoum.

Princess Haya is reportedly living in a home in London with the couple’s two children: daughter Sheikha Al Jalila, born in 2007, and son, Sheikh Zayed, born in 2012.

Another eyebrow-raising detail about the Sheikh Mohammed divorce is the unusual way in which he has publicized the marital breakup in the form of heart-wrenching poetry posted on his website for the whole world to read.

The split has an air of mystery to it despite its highly publicized nature.

Here’s what you need to know about the Sheikh Mohammed divorce.

Sheikh Mohammed and Princess Haya married on April 10, 2004. Throughout the years of their marriage, Princess Haya has spoken quite publicly about her relationship with Sheikh Mohammed. In a 2016 interview with Emirates Woman Magazine, she said: “Every day I am amazed by the things he does. Every single day I thank god that I am lucky enough to be close to him.”

Princess Haya, the daughter of the late King Hussein of Jordan, is a well-known public figure. Known for her love of horses, she represented Jordan in the 2000 Sydney Olympics in show jumping and was also the country’s flag bearer. According to Princess Haya’s website, she is also the former President of the International Equestrian Federation and was also the first ever Jordanian woman to receive a heavy truck driving license.

Sheikh Mohammed has been the Vice President and Prime Minister of the United Arab Emirates and ruler of Dubai since 2006. Princess Haya was his sixth wife – they married in 2004 when she was 30 and he was 53 –  and he reportedly has 23 children by his six wives.

Although the couple’s public image was that of a happy relationship and a perfect life, cracks in the façade began to appear after a highly publicized feud between Sheikh Mohammed and his daughter, Sheihka Latifa, came to a head last year.

Did Sheikh Mohammed’s Disturbing Past Lead to Divorce?

This isn’t the first time the Sheikh has come under fire for abusive and disturbing behavior. Last year, Sheikha Latifa attempted to flee Dubai but was intercepted while trying to escape. Before the attempted escape, Sheikha Latifa released a telling video that claimed her family “did not have the freedom of choice.” The video went on to say that she had been abused by her father and his family.

On July 8, two London-based leading Queens Counsels (QC’s), Alun Jones QC and Rodney Dixon QC, joined the global Free Latifa campaign fighting for the release of Sheikha Latifa. Their plan to secure her freedom involves exploring various legal options available through the UN. They will also use their own expertise to showcase the abusive nature of Sheikh Mohammed’s regime.

“It is most concerning that Princess Latifa has still not been released and allowed to leave the UAE. Her fundamental human rights are being unjustifiably restricted and abused. The international community can no longer stand by,” says Dixon.

After the video and news of Latifa’s attempted escape went public, Princess Haya stood by her husband’s side, claiming that the allegations were far from the truth. Months later, however, sources say that Princess Haya discovered unsettling facts about Latifa’s thwarted escape attempt that have shed a disturbing light on her husband. The sources went on to state that since learning of these facts, Princess Haya has been subjected to increasing hostility from her husband and his family.

She is now seeking political asylum in the UK, where she is preparing for a legal battle against Sheikh Mohammed, who opened up a case against her in the Family Division of the UK’s High Court in May. The split between the billionaire ruler and his wife could potentially be the most expensive divorce in UK history.

While most royal members of the UAE keep their personal lives and relationships private, this split has very much been publicized – and by Sheikh Mohammed in particular, who has gone so far as to publish his own poetry about an unnamed woman who broke his heart on his personal website:

“You no longer have a place with me,” one poem wrote. “I don’t care if you live or die.”

On June 10, the Sheikh published an Instagram post about “treachery and betrayal”, while another post read: “We have an ailment that no medicine can cure. No experts in herbs can remedy this.”

Marriage in the UAE is governed by Islamic law. Under Islamic Law, the right to divorce is given to men, while women must face many different legal barriers before they are granted a divorce. Custody is also typically granted to the man.

Sheikh Mohammed and Princess Haya were married in Jordan and are both Emirati citizens. However, Princess Haya spent much of her childhood in the UK: after attending two private schools, she went on to study Politics, Philosophy, and Economics at Oxford University. She is said to be close friends with Prince Charles and his wife, Camilla.

If Princess Haya can establish residency in London, it is possible for divorce negotiations to proceed there. That being said, the court proceedings could potentially face complications in British court due to the polygamous nature of the marriage. Although England recognizes genuine polygamous marriages that were entered into in a country where polygamy is legal – as they are in the UAE – this divorce will likely have more than its fair share of legal challenges given the unusual circumstances of this high-profile case.

The fate of Princess Haya, now known as the runaway wife, remains unknown. With men given the upper hand in divorce under Islamic Law, it is uncertain how – or if – the Sheikh Mohammed divorce will play out in the UK.

The billionaire ruler’s case against Princess Haya will be heard in London’s High Court on July 30 and 31.