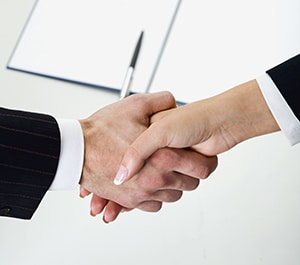 I’ve always felt
statistics were a lot like the Bible: keep looking long enough and
you’re going to find something that proves you’re absolutely right. But
no matter how skeptical you are about statistics, there is little doubt
that divorce is on the rise.

Then again, so is
marriage, which only makes sense, if you think about it. There’s bound
to be more marriages if everybody is doing it two or three times. Just
look at what California alone does to the average.

Now, the most
commonly quoted statistic is that half of all marriages end in divorce.
They don’t say how the other half end, but death is a good bet. In any
event, if you have 10 married couples as friends, chances are that five
of them are going to hit the skids sometime. Not a very comforting
thought, to be sure. But perhaps the problem lies in our expectations:
“Till death us do part.” Forever. Without end. Anything less and it’s
total failure. Maybe this is the wrong attitude. What about treating a
marriage like a mortgage?

You remember back
30 years or so? A mortgage was at 6% for 25 years. Simple. You locked
in, and didn’t get out until you were almost dead. Times were much
simpler then, and so were mortgages.

Look at today. You
may enter into a mortgage with a 25-year amortization, but there is a
five-year term. At the end of the term, you sit down and negotiate the
next period of time. If you can’t reach an agreement, you switch
institutions.

You start out
fully intending to go the distance, but there are milestones that give
both sides a chance to take a second look. At 27 years of age, you
thought Royal Bank was the only bank for you. But now, at 32, the
Toronto Dominion bank is looking rather fetching.

Using this sort of
system, marriage failures would be greatly lessened. In order to
succeed, you’d only have to make it to the first re-negotiation point.
If it doesn’t work out, you cut a new deal.

And just like the
mortgage business, things may be a little different when re-negotiation
time rolls around. In the mortgage business, the interest rates may be
sky high, so you only go for a year to eighteen months. Well, maybe
that’s all she’s willing to agree to, now that she’s seen what you look
like in the morning, or knows what happens after you eat cabbage rolls.

You see, marriage
has been for forever for, well, forever. It hasn’t adapted, hasn’t moved
with the times. Heck, cars used to last 20 years. You see any carmakers
offering 20-year warranties these days? No siree! They’ve come to
understand the temporary nature of today’s society, and build their cars
accordingly.

Under this new
system of marriage, we wouldn’t hear so much about rising rates of
divorce. People would talk about a couple they know, and say, “They were
a very successful couple. They re-negotiated three times, and finally
got out of it with a lump sum payment.”

Michael Beninger is a freelance writer living in Victoria, B.C. He has had two wives, one divorce, and numerous mortgages.