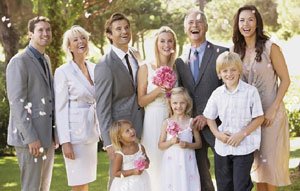 When families separate, it’s common for parents to quickly start dating again. In some cases, they may bring a series of dates home at night; in most cases, one or both parents will marry or cohabitate with a romantic partner. New relationships can confuse and upset your children. Most children see their parents as special: parents are the people who they can count on; they are the ones who take care of and protect the child; and they teach their children how to live. When a breakup occurs, mom or dad stops loving the other parent and starts loving a new person. A child may feel the parent has turned against him. If the person is a stranger to the child, the child may feel deeply betrayed.

Many children feel they must fight for their parent’s attention. They may feel deserted, and they need their parent’s help the most during this period of stress and turmoil. They are worried and confused. A child often feels rejected when the parent gets involved with a new person; they feel unloved, especially if they see the parent show affection for this new person. Younger children are often very jealous and resentful, while an adolescent may react with anger and outrage, as well as feeling anxious and embarrassed.

Some children may feel a sense of relief if the other parent remarries or has a live-in partner. But this can bring new problems: it’s clear that the parents will never get back together, which can cause intense resentment and renewed loyalty to the “real” parent. A new marriage or relationship may strain relations with the other parent, and his/her discomfort could cause a decline in contact with the child.

Stepfathers try to take on the role of man of the house – but lack of involvement or attention by the stepparent also leads to problems. These problems are most intense and long-lasting for adolescents. A young child is better at accepting a stepparent, although it may take several years. It’s also common for stepfathers and stepdaughters to have the most problems.

Some stepmothers have a lot of power over the father; men who are left by their first wives are often eager to please the next woman they become attached to. If she has children, fathers will often treat her children better than his own – which will hurt his own children. Some stepmothers become very involved with the father’s children; they try to replace the mother and compete with her. Many friendly and cooperative divorces change when one parent remarries. The new stepmom might not like the father to have contact with the mother, or she tries to insert herself into the co-parental relationship – suddenly, the mom and dad are no longer getting along.

It can take five years or more to adjust to a new family. Older children, parents, and stepparents all struggle. Break-up rates are much higher than they are for first marriages: one-quarter of all stepfamilies will break up in the first two years. Also, physical and sexual abuse is much higher in stepfamilies than in nuclear families.

A single parent is entitled to a social life; they deserve to have a new partner or special person. But when there are children in the home, adults must take care. It is important to understand the children’s needs – pay attention to what makes them anxious, notice what makes them jealous, and proceed slowly. When you choose a new partner, give your child time to adjust. Try to wait a year before introducing a new partner, and let the child get to know this person in casual places. It takes time for trust and friendship to form. Don’t include the new lover in all the child’s activities, and continue to have regular time alone with your children. You may think the new person is wonderful, but you shouldn’t expect the children to feel the same.

Prepare your children before a new partner spends the night, and reassure them that you love them. Discuss the situation with your new partner; he or she must be sensitive to the children’s emotions. Overnight “dates” with casual partners should only happen when the children are with their other parent.

If you decide to remarry or re-couple, discuss everything with the child first, no matter what their age. They need to express their concerns (and hopes). This helps parents and stepparents move forward and to be sensitive to the children’s needs. Encourage the children to help plan the wedding; they can play a role in it if they are okay with the idea.

Stepparents should expect rejection at first. It can be hard to build a relationship with the children from their partner’s previous marriage, and stepparents must allow for resistance and suspicion. Things will get better in time, but it may take several years. Older children have a harder time accepting a stepparent, and it may never happen: the adolescent may continue to be loyal to the other parent and to the original family. These feelings will block their acceptance of the stepparent. If this is the case, consider waiting to marry again until your teens are out of the home.

Stepparents are also often critical toward the child, especially after the glow of courtship wears off. Relationships can become tense, and you may need some help through these tough times. The birth parents will still be doing most of the nurturing and discipline, and they may not get the help and support they hoped for from the new stepparent.

Stepparents should take the role of social coach and neither discipline the children nor try to replace the natural parent. A stepparent should not ask the child to call him/her “Mom” or “Dad”, or force the child to hug or kiss him/her. If the stepmother wants to get involved with the children’s mother, the father may need to step in to protect his co-parental relationship; he should be the one to email and talk to his ex-wife instead of letting his new wife or partner do it.

Spouses need to work as a team. If they cannot, counseling and marriage or couple classes for stepfamilies will help.  A stepparent and the former spouse (the children’s birth parent) need to create and maintain a polite, business-like relationship. This will help all members of the stepfamily to adjust to the new situation.

This article was adapted with permission from What About the Children? A Simple Guide For Divorced/Separated And Divorcing Parents (CDE, eighth edition, 2011) by Donald A. Gordon (Ph.D.) and Jack Arbuthnot (Ph.D.). Based in Athens, OH, the Center for Divorce Education (CDE) is a non-proﬁt corporation founded in 1987 by a consortium of attorneys and psychologists. The CDE is dedicated to advocating for children and helping parents to minimize the harmful effects that divorce and separation has on children.