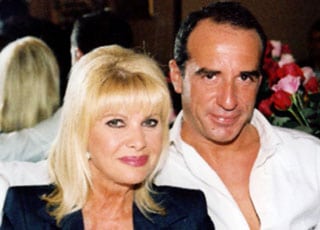 Looks like Ivana Trump has decided to give marriage yet another chance.The socialite, self-help author, and former Olympic athlete and fashion model – and one-time Divorce Magazine advice columnist – got hitched to Italian actor Rossano Rubicondi on April 12, 2008. It’s her fourth marriage.

According to the Palm Beach Post, the wedding occurred at Mar-a-Lago, a Palm Beach, Florida mansion and private beach club owned by her ex-husband, billionaire real-estate tycoon and The Apprentice host Donald Trump. Rather than telling his former wife and her new beau “you’re fired”, though, The Donald attended the wedding, as did his children with Trump, Donald Jr., Ivanka, and Eric. 26-year-old Ivanka Trump was the maid of honor.

The Post reported that the wedding brought more than 500 guests, including Paris Hilton’s parents, hotel heirs Rick and Kathy Hilton. Donald Trump’s sister, Judge Maryanne Trump Barry, presided over the ceremony, which took place under a 15-foot arch surrounded by orchids and roses. The reception afterward reportedly had a Midsummer Night’s Dream theme; in addition, the couple had flown in a 12-foot-high chocolate wedding cake from Germany. A 24-piece orchestra from Paris provided music, as did Neil Sedaka.

Trump’s spokesperson, Catherine Saxton, told the Associated Press that Trump and Rubicondi have been a couple for around six years. They became engaged last September. Rubicondi is 23 years her junior.

Ivana Trump’s marriage to Donald Trump lasted from 1977 to 1992, during which they were leading figures in New York City business and high society; they worked together on many construction projects. Ivana became the Vice President of Interior Design for the Trump Organization and was named 1990’s Hotelier of the Year for her work on the restoration of New York’s Plaza Hotel. She divorced Donald when it came out that he was having an affair with former Georgia beauty queen Marla Maples (whom he later married).

Since her divorce from Donald Trump, Ivana Trump has written frequently about marriage and divorce, including her 2001-02 columns for Divorce Magazine and DivorceMagazine.com, and her book The Best is Yet to Come: Coping with Divorce and Enjoying Life Again. She also had a cameo in the hit 1996 divorce-related comedy The First Wives Club. She married childhood friend George Syrovatka in 1968 (to obtain a foreign passport) and divorced him in 1976. Her third marriage was to Riccardo Mazzucchelli, from 1992 to 1994.