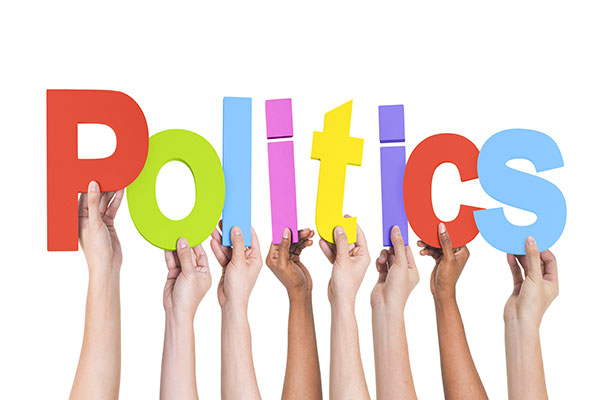 In my experience, political differences between husband and wife do not cause divorce or even weaken the marriage. Relationships that work are not likely to fall apart because of differing political views. Many people believe that political differences destroy marriages – especially since the ideological gap between Republicans and Democrats has grown both deeper and wider in recent years. Here’s how and why I believe a marriage can survive in these difficult political times.

It’s important to remember that political differences alone do not lead to divorce. There are two types of political issues, and they are very different from one another.  The first step is to divide these issues into two camps.  The first camp is economic issues, and the second is social issues.

Most spouses in a happy marriage do not have fundamental differences regarding major economic issues, such as social security, medicare, healthcare, national defense, and the like. Minor differences may be present, but the spouses agree upon the overall wisdom of having such national programs. By in large, these government programs have become part of our everyday life and are well accepted.

Let’s move on to the second camp: social issues. Here is where we usually find different opinions of the parties. Examples of these issues include abortion, affirmative action, immigration, religion, criminal law enforcement, freedom of speech, and other actions and conduct that supporters believe should be freely available to all citizens. How can spouses see eye-to-eye on all of these important matters?

In the end, if a couple agrees on almost all economic and social issues – and agrees to tolerate a handful of differing viewpoints in their partner – then political differences aren’t going to end their marriage.  This solution is certainly not perfect, but it’s sufficiently acceptable to avoid a marriage breakdown. In most cases, political differences do not destroy marriages.

Spouses need a close enough relationship to discuss and compromise, and many have this at some level. If that’s not the case, then tolerance won’t work – and usually, nothing else will either. The marriage is probably already fractured, and it’s unfortunately likely that the parties were headed for divorce long before political differences drove another wedge between them.

Jay A. Frank is a senior family law attorney with Aronberg, Goldgehn, Davis and Garmisa in Chicago, Illinois. He has more than 40 years of numerous achievements. He represents a wide variety of clients, including attorneys, television and radio personalities, corporate executives, entrepreneurs, sports figures, physicians, accountants, and other professionals on a local, national and international basis.  www.agdglaw.com