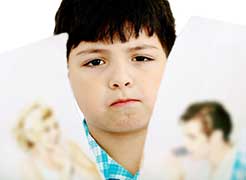 This year, it is projected that the majority of youngsters under the age of 18 will spend some part of their childhood in single-parent families. The vast majority of these will be created by divorce.

Nationally in 1990, there were 1.2 million divorces, with more than one million children involved in these divorces. Since the mother is often the primary parent, the discussion below assumes that this is the case.

These statistics show that divorce has become a significant and predictable life event. It is a complicated process that can provide the children involved new opportunities for growth or forge lifelong emotional chains.

A wide range of outcomes can occur even for children within the same family. The divorce impact and reaction of children are determined by several factors including the child’s gender, position in the family and individual temperament. However, the two most important factors are the child’s age and the nature of the parent’s adjustment. Quite simply put, it is how well the parent handles the divorce transition that affects the children far more than the divorce itself.

There are differences in how boys and girls react to divorce. Boys take divorce harder than girls. Single mothers have a more difficult relationship with their sons than they do with their daughters and more than do mothers in married families.

Some examples of a child’s reaction might be that your four years old may suddenly start wetting her bed again or stop using her fork. She is not necessarily being ornery but she may be trying to hide from the divorce in the safer world of infancy. Or your six-year-old son suddenly starts bullying his first-grade friends. He is not necessarily turning into a ruffian but is probably acting out his anger at his father for leaving or his mother for letting it happen and most importantly, at himself for causing it.

Divorce, like any other crisis, has its own timetable-one that takes approximately three years to work through.

The critical period for all children in the year following the actual physical separation. Divorcing parents are almost always distracted during the initial period and this is when the children are most likely to react. Rules, routines, discipline and even play periods are thrown into disarray as the family attempts to find its own new rhythms.

As the second year begins, life gets better, especially for young girls. Life has begun to settle down. The newly single mother, if she has not worked out of the home before, has usually found some sort of outside employment. If the family is forced to move, they have usually done so. The pattern of time sharing has been established.

Life may be moving forward in a positive or negative way, but it is predictable. Children need their life to be predictable. Boys continue to be more aggressive and to have a more difficult relationship with their mothers.

If all has gone smoothly, the third year usually sees the end of the divorce cycle. If not, the stress continues. On the good side, parents have settled down enough to turn their attention back to the children. New routines and new rules have been established. The future can begin to look brighter.

We know that parental divorce is and of itself not as much a determinant of a child’s poor adjustment as is the climate in which your child continues to live.

If parents can control their own emotions and get their lives back on track, their children will have a better chance of coming through the divorce process minimally scathed.

Parents who maintain a working relationship with each other also help the children come through this process with the least permanent damage. If both parents can maintain open lines of communication and share parenting decisions, the effects of divorce on the children can be minimized.

Parenting is for life-even though marriage isn’t always. Children can survive and even benefit from a healthy divorce if the parents can keep their differences between themselves and continue positive involvement with the children. CHILDREN SUFFER THE MOST IN BAD MARRIAGES AND IN BITTER DIVORCES.