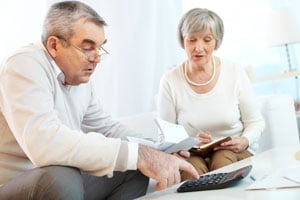 Gray divorce refers to the growing trend of seniors filing for divorce. Turns out that itch might just take longer than seven years to develop.

And it’s a trend that’s rising quickly. In America, the rate of divorce has doubled for those over 50 since 1990.

A significant portion of gray divorces are first marriages where the couple has been together for more than 20 years – and that’s a long time for financial assets to build up, making gray divorces more difficult.

Gray divorces can have a serious impact on the welfare of both parties because it means cracking open the nest egg. The net wealth of widows and widowers over 50 is more than twice that of gray divorced individuals – which should motivate seniors looking to file for divorce to make sure retirement products are equitably split. Retirement products are almost always split evenly – even when one spouse is to blame for the divorce.

Here are 5 things to watch for financially when separating after 50:

If a couple has been married for more than 10 years and one makes more money than the other, alimony tends to be the rule rather than the exception. And since half of gray divorces are first marriages, alimony tends to pop up. Also, don’t think that retiring early is a way out of paying alimony from your income. Depending on the state, judges have been known to calculate alimony payments based on earning potential, not just actual earnings, in the case of underemployed spouses.

A percentage of a pension or 401(k) can be divided between a beneficiary and their ex by filing a QDRO, or a Qualified Domestic Relations Order, with the pension or 401(k) issuing company. This can be done without financial penalty or additional taxes if rolled into another eligible retirement product.

A similar process as that of a pension or 401(k) is followed for the division of an annuity – except an annuity division QDRO can require a judge’s approval. Depending on the original annuity contract, future payments may be divided or lump sums issued to each party.

If you have a structured settlement from a personal injury or wrongful death case that occurred during the marriage, your ex-spouse may be entitled to some of the payouts if they were involved in the case. This doesn’t mean the division will be 50/50; they may be entitled to a smaller amount if, for instance, they supported you through an injury which resulted in a settlement.

Pensions, 401(k)s, life insurance policies and the like all have beneficiaries listed in the event the holder dies. Most people indicate a spouse. However, when a spouse becomes an ex, the beneficiary doesn’t automatically get removed. Make sure you contact each issuer to designate a new beneficiary.

“Many are less willing to remain in empty marriages that are not gratifying,” Ludwig said.
“These divorcing seniors often describe their thinking like this: ‘I only have a few years left, and I might as well make the most of it.’”

Research from AARP backs up these claims that older, divorced Americans find themselves happier and emotionally better off than they expected.
Meaning, so long as the financial challenges of a gray divorce are mitigated, there’s a golden light at the end of the tunnel.

Catherine J. Byerly has worked in communications for the past four years, handling everything from on-air public radio casts to writing for business news publications. Catherine currently is the head staff writer at Annuity.org and StructuredSettlements.com.