Psychotherapist, family therapist and internationally known divorce recovery expert, Vikki Stark, MSW is the director of the Sedona Counselling Centre of Montreal. She began her career thirty years ago working with families in Harlem. In 1985, she moved from her native New York City to Montreal where she has helped thousands of individuals, couples and families improve their relationships and get more pleasure from their lives. Vikki has appeared in the media on NBC's The Today Show, Oprah radio, USA Today, The New York Daily News, Maclean’s Magazine and CBC news, and presented at an international women’s conference in Rome. She is a familiar face on the television news in Montreal where for eight years she was the resident family therapist on Global Television's This Morning Live. She writes a blog for Psychology Today magazine called Schlepping Through Heartbreak. Vikki is the author of three books: The “Divorce Talk”: How to Tell The Kids. Breaking the News Without Breaking Their Hearts (2015), Runaway Husbands: The Abandoned Wife's Guide to Recovery and Renewal (2010), and My Sister, My Self: The Surprising Ways that Being an Older, Middle, Younger or Twin Shaped Your Life (2006). 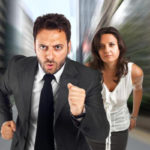 Wife Abandonment Syndrome is a pattern of behavior that begins when a runaway husband leaves his wife without ever having told her that he was unhappy.